"Revolt and the Distant Observer" focuses upon the prevalent mode of vision and the engagement of the distant onlooker in relation to mediated political events, critically exploring the role played by mass and informal media as well as by technological devices in the politics of representation. The exhibition is the culmination of a year-long series of events. 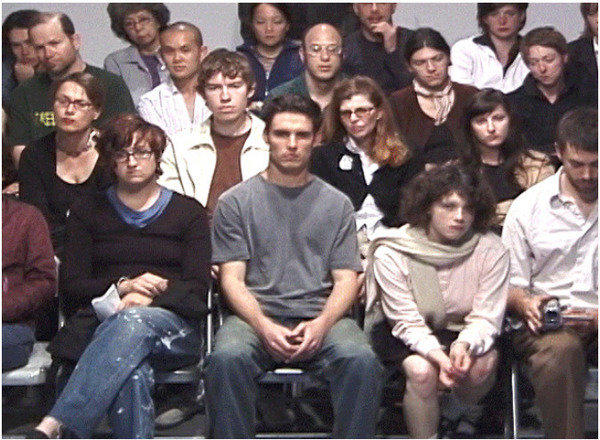 Regarding Spectatorship: Revolt and the Distant Observer focuses upon the prevalent mode of vision and the engagement of the distant onlooker in relation to mediated political events, critically exploring the role played by mass and informal media as well as by technological devices in the politics of representation.

In the aftermath of highly mediated protests across the globe, an ever-growing number of people seem to be experiencing political unrest from afar. Images of dissent and revolt are disseminated at an exponential speed and breadth. New “social” media, as well as more traditional broadcast communication channels, increasingly play a growing role in uprisings and conflicts, becoming as much a part of their spectacle as its medium.

The exhibition at Kunstraum Kreuzberg/Bethanien is the culmination of a year-long series of events and online publications. Through a variety of artworks by artists of different generations, as well as through a plethora of musical, literary, journalistic and cinematic documents, the exhibition presents diverse and at times contradictory forms of spectatorship in relation to political events. It explores the role played by spectators, questioning their agency and interest concerning circumstances that they do not experience directly, and asking how might they be implicated within this peculiar long-distance relationship. If mediation is inherent to the contemporary political sphere, how does this forge perceptions and reactions? Is spectatorship intrinsically voyeuristic, or conversely, does it carry emancipatory potential? How might the observer contribute to the construction of historical narratives? Is the act of viewing individual and solipsistic, or might it also effect or help constitute a collectivity?

Gathering questions concerning the ambivalent way in which the role of technological mediation is perceived within the political sphere, it problematizes the notions of distance in relation to involvement, spectatorship in relation to engagement, and vision in relation to action.

As its title suggests, the exhibition proposes a stage for a self-reflexive gesture: “we”—who observe other onlookers by way of a lens, screen or canvas—become spectators ourselves.
​​
​Events:​
​9 Jan 2016, 7 pm: Screening
​of The Uprising, 2012 by Peter Snowdon in the presence of the artist *
15 Jan 2016, 7 pm: Talk with Marianne Franklin, Professor of Global Media and Politics, Goldsmiths, University of London.

Education programme in cooperation with the University of Potsdam: students of the course "Revolutions, self-disclosure, knowledge and ‘tweeting’ – Globalization and the local media culture of the internet" will propose guided tours in the show and a final panel discussion, gathering together their reflection on the exhibition from a cultural studies point of view.
5, 12, 19 Dec, 5-6 pm guided tours
9 Jan 2016, 12 am – 5 pm: Panel discussion
(* Important remark: please consider this date rather then the one indicated in the flyer)

Regarding Spectatorship is a Kunstraum Kreuzberg/Bethanien project, funded by Hauptstadtkulturfonds Berlin, with the kind support of The Artis Grant Program.