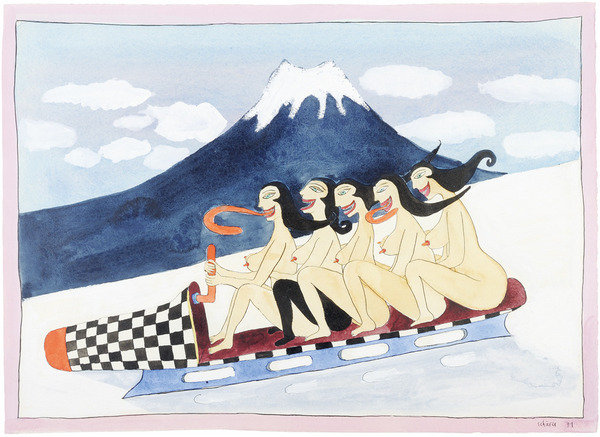 From the late 1960s to the mid 1980s, Schärer painted over 100 paintings entitled Madonna, each featuring the head and body of an isolated figure, often with a framing silhouette around the head and shoulders suggesting long hair, a veil or a cloak. Painted with thick layers of oil paint, and incorporating objects such as stones, hair, shells and keys, the Madonnas are both menacing and mesmerizing – typified by unnerving gazes and prominent, tooth-filled mouths that grimace and gape.

An artist, musician, composer and writer, Schärer was an influential figure in the Swiss art scene of the 1970s and 1980s. In recent years his work has received increased international attention, most prominently in the 55th Venice Biennale, The Encyclopedic Palace, curated by Massimiliano Gioni, when Cindy Sherman included a suite of Madonnas in her installation, Almost 20 years after his death, Swiss Institute is thrilled to exhibit these singular bodies of work for the first time to audiences outside of Europe.

One for all
Andrea Crespo: virocrypsis

Cynthia: How long has it been?
Celinde: It doesn’t matter. There’s nothing we can do about it, we’re trapped–
Cynthia: – We’re becoming.
*both sigh*

Swiss Institute is pleased to present the first institutional solo exhibition in the United States of New York-based artist Andrea Crespo, centered on a new video, virocrypsis (2015), which develops the artist’s ongoing inquiry into posthuman desire.

Crespo is attentive to the way that communities have formed on sites where desire can be seen to take various forms, in the shape of characters, avatars and other types of vessels. In this vein, conjoined characters named Cynthia and Celinde appear in several of the artist’s works and virocrypsis features a splintered dialogue between their two voices. A sense of mutating desire and energy is captured by splattering liquid, bioprinters producing new fruits and singing five-headed Vocaloid(s), as well as stuttering punctuation that suggests an intense energy spinning in place: cooling, buffering and loading.

Previously, Crespo has used images of similar characters found in online image sharing communities such as DeviantArt, but here Crespo has made digital tablet paintings of Cynthia and Celinde for the first time. While they have recognizable vernacular characteristics common to communities of fandom, they also depart from this style. In both the video and a new series of fabric prints, it seems possible the characters exist solely for each other, as though they might have drawn themselves.

Andrea Crespo: virocrypsis is the fourth exhibition in the ONE FOR ALL series at SI. Building on Swiss Institute’s long history of providing a platform for emerging artists, each show will be the artist’s first institutional solo exhibition in the United States with a newly commissioned body of work specifically created for the exhibition space. Swiss Institute is grateful for support from the VIA Art Fund, Presenting Sponsor of the ONE FOR ALL series.

SWISS INSTITUTE PROGRAMMING IS MADE POSSIBLE IN PART WITH PUBLIC FUNDS FROM PRO HELVETIA, SWISS ARTS COUNCIL, THE NEW YORK STATE COUNCIL ON THE ARTS, WITH THE SUPPORT OF GOVERNOR ANDREW CUOMO AND THE NEW YORK STATE LEGISLATURE, AND THE NEW YORK CITY DEPARTMENT OF CULTURAL AFFAIRS, IN PARTNERSHIP WITH THE CITY COUNCIL. MAIN SPONSORS INCLUDE LUMA FOUNDATION AND FRIENDS OF SWISS INSTITUTE (FOSI), LEADING PARTNERS INCLUDE UBS AND VICTORINOX. SWISS INSTITUTE GRATEFULLY ACKNOWLEDGES SWISS AS TRAVEL PARTNER, AND CHELSEA HOTELS AS HOSPITALITY PARTNER. SWISS INSTITUTE IS GRATEFUL TO VIA ART FUND, PRESENTING SPONSOR OF THE ONE FOR ALL SERIES, TO THE ANDREA CRESPO EXHIBITION CIRCLE, AND TO HESTER, NEW YORK FOR PRODUCTION SUPPORT.