The curator starting point has been a comparison of Andy Warhol's films along the lines of his paintings. Warhol conceived of those screentests as 'moving stills' and portraits in the tradition of classic painting. 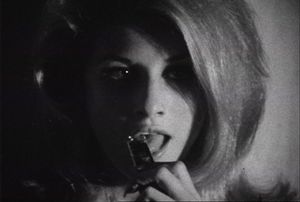 An exhibition in cooperation with the Museum of Modern Art New York, curator: Mary Lea Bandy

After the opening there will be an Andy Warhol Motion Pictures Party
from 10 p.m. on.
Special appearance: Maximilian Hecker

On the occasion of Das MoMA in Berlin, the Museum of Modern Artâ€™s painting and sculpture collection being presented at the Neue National Gallery in Berlin, KW will present Andy Warhol: Motion Pictures from May 8th to August 8th 2004. P.S.1/MoMA and KW have closely cooperated for the last six years and this exhibition reflects on the continuous collaboration.

Mary Lea Bandy, Chief Curator, Department Film and Media, The Museum of Modern Art, has been invited by KW to develop an experimental form of presentation for the cinematic artworks of Andy Warhol. Her starting point has been a comparison of Andy Warholâ€™s films along the lines of his paintings. In her latest exhibition at Museum of Modern Art in New York she presented eight screentests. Warhol conceived of those screentests as â€œmoving stillsâ€ and portraits in the tradition of classic painting. Correspondingly Mary Lea Bandy chose the presentation form of projections and ultra flat screens framed by classical dimensioned wooden frames.

In addition Bandy also explores how other typical film works of Warhol might be presented continuously and simultaneously in a semi-dark environment as multi-channel installations such as Chelsea girls as opposed to single-channel films such as Eat, Kiss, Sleep, and Empire.

The exhibition has been made possible thanks to the support of the Hauptstadtkulturfonds.