There is tiresome, but attractive. The exhibition brings together various photographs from the city's business and shopping districts, that is still under construction. The artist transforms the street scenes and architectures into ''Urban Characters''. 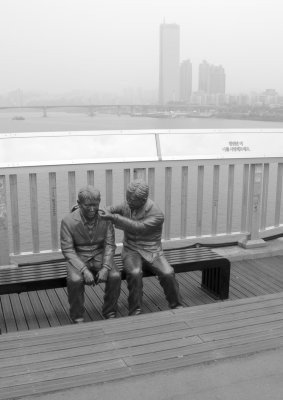 In her exhibition /There is tiresome, but attractive /Diana Artus presents the results of her three-month artist residency in Seoul in spring 2015. Recurring themes in the artist's work are the interaction of urban space and mood as well as thepossibility of a psychogeographic reading and narration of urban space. This time her research was inspired by the theories of South Korean philosopher Byung-Chul Han, who referred to his country as "fatigue society in the final stage", and focused on the specific atmosphere of Seoul between "excitement" and "exhaustion".

In the form of an installation setting the exhibition brings together various photographs from the city's business and shopping districts, especially Gangnam and the "Smart City" Songdo that is still under construction. Experimenting with the image carrier and the form of its presentation, the artist transforms the street scenes and architectures into "Urban Characters". In her series of works of the same title–/Urban Characters/–the artist turns architectural bodies into representative characters, who confront the viewer as independent personalities with distinctive characteristics. In the case of Seoul, these are ultra modern buildings, but barely able to keep upright. These new works entitled /Dropouts /literally fall out of the frame into the exhibition space. It seems as if they were acting out the exhaustion that the passers depicted do not concede. When asked "How are you?" the disciplined subject answers "Very busy!" Artus' /Businesscard of a Full Body Sandwich Man/ refers to the importance of the business card as proof of such activity.

The need for a permanent commitment and optimal appearance exerts immense pressure and in order to keep up the motivation, there is suggestive encouragement. Shown on a flatscreen, /Korean Notebook Wisdoms/ is a collection of aphorisms that the artist has discovered on the covers of Korean College blocks - the title of the exhibition is one of them. The slogans -–written in incorrect English– oscillate oddly between reassurance and encouragement; sprung from the Confucian philosophy they fit seamlessly into a global neoliberal work ethic.

Diana Artus further presents her new artist's book /A Korean Notebook,/ which is inspired by the Korean college blocks. It brings together the image and text level of the exhibition and–as the name suggests– it also can be used as notebook.