God's Reptilian Finger. The artist's practice is rooted in folklore and dreams, conspiracy theories, ancient mythology and magical practices. The Guatemalan Civil War (1960-96) is a recurring subject in his work. 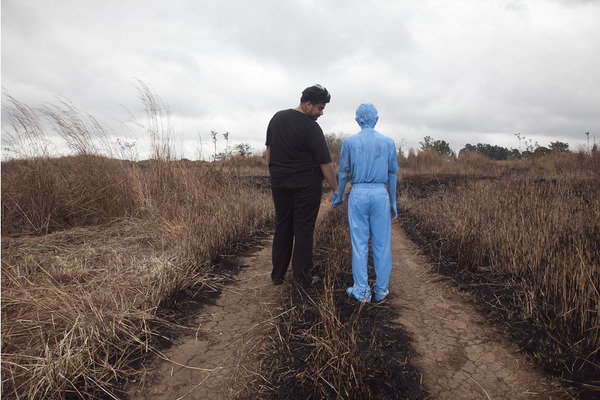 Gasworks presents God’s Reptilian Finger, the first UK solo exhibition by Guatemalan artist Naufus Ramírez-Figueroa.
Ramírez-Figueroa’s practice is rooted in folklore and dreams, conspiracy theories, ancient mythology and magical practices. The Guatemalan Civil War (1960–96) is a recurring subject in his work, softened only by the at times absurd or humorous approach that colours many of his sculptures, performances and works on paper. He often appears semi-nude in his live works, his nakedness channeling a subcultural urge for liberty that is at odds with more stifling or conventional readings of the body.

Recent works include the video A Brief History of Architecture in Guatemala (2010–13), which shows three amateur dancers (including the artist) shuffling about to a traditional marimba melody in costumes that represent different Guatemalan architectural styles. Their outfits gradually fall apart to reveal their bare bodies in a pointed, if tongue-in-cheek, criticism of Guatemala’s policies of urban renewal. In the theatrical installation Props for Eréndira (2014), on the other hand, Ramírez-Figueroa excavates Gabriel García Márquez’s 1972 novella The Incredible and Sad Tale of Innocent Eréndira and her Souless Grandmother about a girl forced into prostitution by her grandmother after accidently burning down the family home. As if setting the stage for a drama about to unfold, vividly painted polystyrene sculptures of key objects from the life of the protagonist are set against pink-smoke wallpaper.

Using similar methods, the two new sculptural installations that comprise God’s Reptilian Finger focus on the amateur archaeology practiced by both Mormon missionaries in Guatemala since 1947 and current followers of contemporary British conspiracy theorist David Icke. In the first gallery, five gold, geometric shapes made of polystyrene shield nesting swarms of swelling jelly worms, inspired by Icke’s view that the global ruling classes are the descendants of the ‘Babylonian Brotherhood’ – the name he gives to an ancient, extra-terrestrial, reptilian race, originating in the Middle East. In the other installation, a giant, glowing replica of God’s finger hovers in mid-air in a black-lit gallery, surrounded and illuminated by floating stones painted in phosphorescent colours, some of which are carved in the style of Mayan reliefs. In combining Mayan motifs with unsanctioned Mormon mythology, Ramírez-Figueroa re-appropriates the second-rate archaeology of Mormon missionaries in Guatemala, who sought to conjure up evidence of Western influence upon pre-Columbian civilisations.

Turning such delirious theories on their head, God’s Reptilian Finger offers up a vision of a critical, hybrid mythology that blurs the boundaries between religion and speculation, evangelism and imperialism.

Naufus Ramírez-Figueroa holds a BFA from Emily Carr University in Vancouver and an MFA from the School of the Art Institute of Chicago, and was a post-graduate researcher at Jan Van Eyck Academie in Maastricht in 2013. He has participated in various solo and group exhibitions including the 13th Lyon Biennial (2015); the 10th Gwangju biennial (2014); A Chronicle of Interventions, Tate Modern, London (2014); Illy Present Future 2013 Prize Exhibition, Castello di Rivoli, Turin; Beber y leer el arcoiris, Casa América, Madrid (2012); Home Works IV, Ashkal Alwan, Beirut (2008); and the 53rd Internationale Kurzfilmtage Oberhausen (2007). He is a recipient of a Guggenheim fellowship, a Franklin Furnace award and an Akademie Schloss Solitude fellowship (selected by Dan Graham), and recently won the 2015 ARCO Region of Madrid Award for Young Artists. Ramírez-Figueroa lives and works in Guatemala City, Guatemala.