Haller engages with conventions and the history of painting, trying to leave it behind in her own work. She has produced a new series of graphic works on mineral composite boards. Celmins has been known since the 1970s for memorable subjects -seas, deserts, nocturnal skies, spider webs- she renders in a variety of media. In this retrospective she has selected over 70 works. 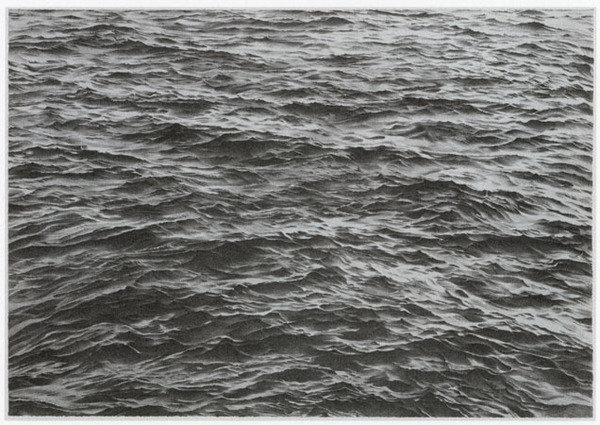 Julia Haller
Smile from the Streets You Hold

Julia Haller engages with conventions and the history of painting, trying to leave it behind in her own work.

Her exhibition Phtata at Cologne’s Reisebürogalerie in 2012 presented canvases strangely distorted as though the fabric were stretched too tightly. Bulking out from the wall, they took on an object-like character, defying the flatness that defines painting as a medium. Working with thin translucent paints on primed canvases, Haller, who studied textual sculpture with Heimo Zobernig at the Academy of Fine Arts Vienna, had painted ornamental patterns based on elemental geometric shapes or fields that stood out from the backdrop.

The artist’s repertoire of materials ranges from bone and rabbit-skin glues across shellac, acrylic paints, and gouaches to iron-oxide pigment. In a series of small-format untitled works (2014) that were on view in the exhibition Passion at Galerie Christian Andersen and other venues, canvas painted with a deep black iron oxide is set behind glass to produce a strongly reflective and iridescent violet-blue surface in which fields and lines only gradually reveal themselves—almost as though they did not want to be discovered.

Two concurrent exhibitions Haller presented in Vienna in 2014—one at Galerie Meyer Kainer’s Boltenstern-Raum, the other at Diana Lambert—featured another untitled ensemble of works: a series of drawings transferred onto mineral composite panels, where they emerged as engraved lines filled with color. The show at Boltenstern-Raum consisted of the pictures the artist had drawn with her right hand; the left-handed “matches” were on view at Diana Lambert, their absence from the former exhibition marked by blank spaces on the wall between the pictures.

For her first institutional solo exhibition in Austria, Julia Haller has produced a new series of graphic works on mineral composite boards, whose surfaces she treats by milling, applying pigments, and other techniques. The artist’s interest in creating a situation in which works of art can be perceived both as self-sufficient and as mutually complementary—in which the display is more than the sum of its parts—is accommodated by the presentation of her works in different rooms at the Secession. Subtle interventions further manipulate the visitor’s perception of the rooms in which the works are on view.

The artist’s book Peter, with an essay by Alexander Hempel, will be published in conjunction with the exhibition.

Vija Celmins has been known since the 1970s for memorable subjects—seas, deserts, nocturnal skies, spider webs—she renders in a variety of media. Celmins’s retrospective at the Secession is her first solo exhibition in Austria, for which she has selected over seventy works of graphic art from five decades; it surveys this strand of her oeuvre from work she created as a student in the early 1960s to several recent editions that have never been on public display.

Celmins uses images from photographs and found printed matter, stripping the sources of their original contexts and reassembling them in a new medium. The repetitive interpretation of a small number of motifs shifts attention from the image to the material for a probing examination of its specific qualities and effects. Printmaking thus occupies a central position among the many media Celmins works with, on a par with drawing, painting, and sculpture.

The prints, for which Vija Celmins scratches copper plates, incises wood surfaces, and draws on stones, illustrate her abiding interest in the various processes and making things by hand. Her exploration of traditional printmaking techniques and their potential is sustained by her outstanding skills. In the 1970s, she started with lithography, a planographic process that a strong affinity to drawing; starting in the early 1980s, she focused on intaglio processes: etching, mezzotint, and woodcutting. The most prolific genre in her printed oeuvre is the mezzotint, for which white areas are scraped out of the printing plate—the deeper the brighter—to produce a wide range of velvety halftones: an ideal technique for Celmins that allows her to translate her black-and-white photographic sources into subtly nuanced shades of gray.

Celmins’s prints are products of time-consuming craftsmanship; she works hard to achieve results that hide the labor that went into them. One must examine them carefully to discover the rich nuances and appreciate the intimate and patient engagement in which the artist has taken possession of her sources. As Celmins said of Ocean Surface (2000), a woodcut on which she worked intermittently for five years,

“… when you look closer you can see my mark is not so mechanical. I hope it’s a work where stillness and movement, flatness and depth are held together in a delicate balance. I like to hide things behind looks, so that the work looks like a photograph but when you get close you see it’s something handmade and carved from wood: a kind of surprise.” (The Prints of Vija Celmins, The Metropolitan Museum of Art, New York 2002, p. 43)

Celmins’s art maintains a delicate balance between abstraction and depiction, between surface and proportion, between the suggestion of movement and stillness. Their small formats belie their expansiveness. Many of the pictures evoke boundless spaces and actions that have crystallized in novel physically manifest and immutable forms. Structured by the equipollence of multiple elements and without perspectival vanishing points, the pictorial spaces withhold any sense of orientation, confronting the viewer with the total experience of sea, desert, or starry sky. That impression is gently undercut along the margins, where the support medium—paper—comes to the fore; the placement of the printed motif on the sheet is of particular significance. In an earlier interview, Celmins observed:

“Because my images tend to run on, as if they went on forever, they have to be carefully ended. At the edges one breaks the illusion of continuous space and sees the making process and that the work is really a fiction.” (ibid., p. 14)

An artist’s book A Work of Imagination by Vija Celmins published in conjunction with the exhibition includes reproductions of selected works as well as a choice of previously unpublished poetic sketches and reflections on aesthetics culled from her diaries of the past several decades.

Vija Celmins
Over the past four decades, numerous museums have showcased Vija Celmins's art. Past solo exhibitions have been on view at the Whitney Museum, New York, in 1973; the Institute of Contemporary Art, Philadelphia, in 1992; the Metropolitan Museum, New York, in 2002; the Centre Pompidou, Paris, and the Hammer Museum, UCLA, Los Angeles, in 2006; the Menil Collection, Houston, in 2010; the Museum Ludwig, Cologne, in 2011; and the Latvian National Art Museum, Riga, in 2014.
Vija Celmins was born in Riga (Latvia) in 1938. At the end of World War II, her family fled the country, first to Germany and then to the United States. Celmins lived and worked in Los Angeles from 1962 to 1981 before moving to New York.

This exhibition project was made possible through the generous support of Phileas – A Fund for Contemporary Art.