The Han Nefkens Foundation presents Chinese artist's video Blue and Red (2014) at the MACBA Convent. It is a document that offers a subjective and poetic vision of this troubled atmosphere of civil war in Bangkok. 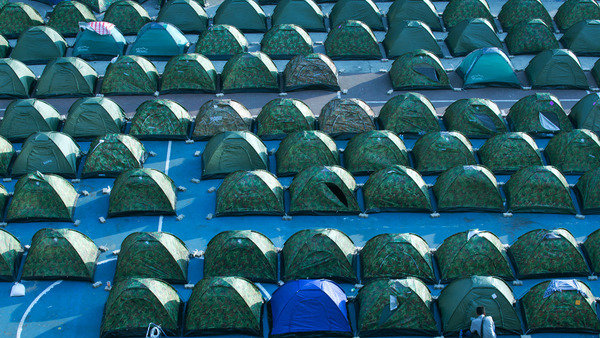 The biennial HNF/BACC Award grants the winning artist 15,000 EUR and includes a residency in Bangkok and a solo exhibition at the Bangkok Art and Culture Centre (BACC).

Zhou Tao made Blue and Red during his stay in Bangkok, a turbulent time in which there was an attempted coup in the country. The video is a document that offers a subjective and poetic vision of this troubled atmosphere of civil war by handling reality in a complex manner and ultimately turning it into fiction. It is a narrative of events without a clear storyline, driven by physical and psychological impulses: time and landscapes flow by and merge to tell a sensual yet also semi-documentary story.

In Blue and Red, images of two cities as different as Guangzhou (where the artist lives) and Bangkok intertwine to form a single scene, a single universe—a "third reality." The artist films these cities, their inhabitants and their activity without intervening directly, using his camera as a patient eye that objectively records everything that happens. In the case of Blue and Red, he focuses on the protesters' tents, rituals and movements. Everything is bathed in a sensual, mysterious blue light that comes from nowhere, a kind of filter or second skin that covers the slow rhythm of events. The word red in the title is a reference both to the colour of some protesters' T-shirts and to the blood of the injured.

After the MACBA, Blue and Red will travel to the Museum Boijmans Van Beuningen in Rotterdam, where it will be on display from December 5, 2015 to January 10, 2016.

The FHN/BACC Award is aimed at up-and-coming artists under 40 living in Asia. The long list of candidates is put together by ten scouts from different areas in Asia who each select three artists. A jury then chooses the winning artist. This year's jury was made up of Yuko Hasegawa, chief curator at the Tokyo Museum of Contemporary Art; Feng Boyi, a Chinese independent curator; Luckana Kunavichayanont, director of the BACC; Hilde Teerlinck, president of the Han Nefkens Foundation; and Han Nefkens himself.

Zhou Tao is currently working on a new project in Barcelona, where he is doing a three-month residency (October to December 2015) at Hangar. Due to be presented in 2017, his new piece will be a video recorded in three very different places: China, Africa and Spain.