The First Night of the World. The exhibition presents her recent work, mingling reverie and deep reflection. Bringing together some thirty paintings, it includes several large triptychs from a series the artist has titled Theatres. 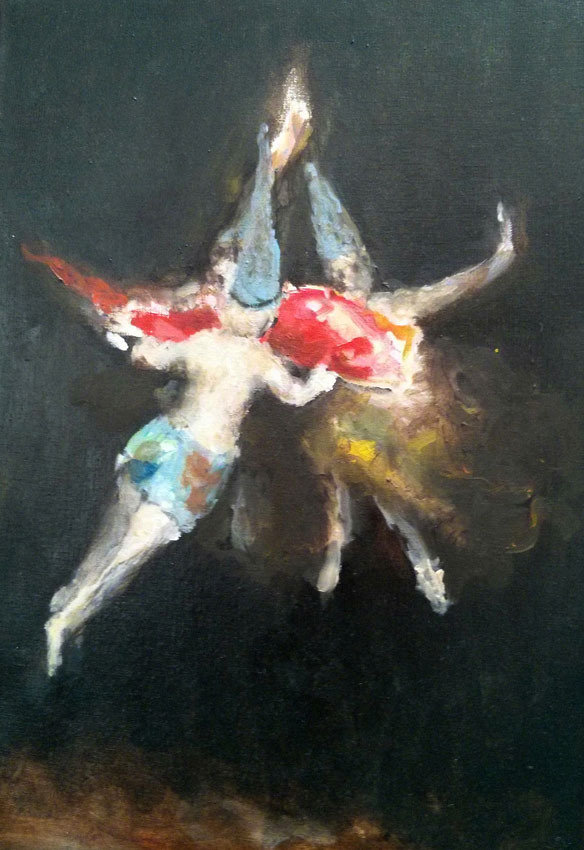 from 26 November 2015 to 27 March 2016 Musée d'Art Moderne et Contemporain de Strasbourg ( MAMCS) The First Night of the World is the Franco - Swiss artist's first exhibition in France since 2009. Held at the Strasbourg Museum of Modern and Contemp orary Art (MAMCS), it brings together Valérie Favre's most recent paintings and an impres sive collection of over 200 drawings inspired by a reading of Maurice Blanch ot's novel Thomas the Obscure.

Covering an area of some 600 m2 , this exhibition by an artist whose work has rarely been seen in France introduces her recent work, mingling reverie and deep reflection. In choosing "The First Night of the World" as the t itle for this important exhibition being held by the MAMCS, Valérie Favre (born 1959 in Bienne, Swi tzerland) has borrowed a phrase from Maurice Blanchot's Thomas the Obscure to describe a project owing as much to literature as to the theatre. Fascinated by this strange narrative, the artist has painstakingly undertaken to produce her own handmade copy of the book, illustra ting it with ink drawings. With an exhibition layout designed by the artist herself, the resultin g two hundred or so drawings combine to create an environment which shapes the core of the exhibition.

Bringing together some thirty paintings – all made in Berlin, where Favre lives and teaches at the prestigious Universität der Künste – the exhibition includes several large triptychs from a series the artist has titled Théâtres. These large-format paintings are equally impress ive in their monumental proportions and the amazing scenes they depict. In a sombre but by no means humourless vein, Théâtres ' bizarre parades or ships of fools conjure up a vi sion of the world's folly. Working in series – Robes rouges ( Red Dresses ), the Lapines Univers ( Universe Bunny Women ) or Suicides are among the topics on which she has already comp osed numerous variations – Valérie Favre also presents several paintings that further cycles already in progress. These include Fragments , close to Victor Hugo's ink drawings but with an u nexpected development and conclusion, Ghosts , inspired by Goya's Flight of the Witches , and the latest addition to Balls and Tunnels , an ode in praise of serendipity. The exhibition e nds with a series of ink drawings where references to art history, literature and the conte mporary world meet in a froth of lines and collages.

To mark this event a trilingual catalogue, including contributions by Heike Fuhlbrügge, Daniel Payot and Corine Pencenat and an interview between the artist and the exhibition curators, has been published.