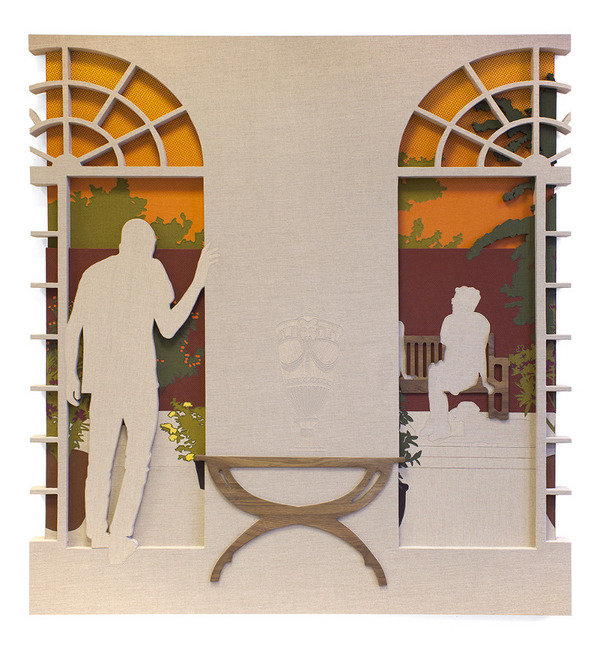 As the seasons pass, the door of the vertical casement window in Lauren Keeley’s series of paintings – I’ll call them ‘paintings’ for now – is tipped ajar, closed, or wide open. Beyond this window frame, the view cycles through degrees of proximity and distance, buffeting the gaze back into foreshortened space, allowing it to escape through an open gate into nebulous, sublime depths beyond, or roughing it at its obdurate surface. People and individuals, a dog amidst, inhabit the frame, or are caught at its edge, coming and going. Various laconically rendered furniture, paintings and plants – from neo-classicism to rococo, post-war modern to contemporary style – furnish the space, but the point of view remains the same.

At Frutta, the gallery is a support for Keeley’s hybrid works to materialise in space an imaginary architecture hitherto contained within them. A flattened near-scale panel of a bookshelf lined with volumes and ceramics might have shimmied out of one of the pictures, released from the realm of the virtual onto the gallery wall. Here, as with the remarkable Studiolo at the Palazzo Ducale, Urbino, an opulent study lined with trompe-l’oeil shelves, benches and objects, Keeley’s scale and material renders it lifelike. It frames how we see the pictures surrounding it. This could be the visage of a bookshelf. There are only degrees of separation between that flattened rendering of an ercol Chiltern bench and the plumped-out real thing.

With a certain nihilistic élan, Marcel Duchamp enfolded the two foundational devices for perspectival painting – the window and the mirror – to make Fresh Widow (1921), a miniature French window with each of its eight glass panes blinded by swatches of black leather. These swatches, Duchamp instructed, were to be ‘shined everyday like shoes’. If this hybrid object negated the function or use of its constituent parts, it would also forever complicate art’s relation to knowledge, of the external world and the self, resolutely closing the French door on illusion. (I can hear Duchamp’s wicked laughter at the metaphysical labour of polishing dim lustrous skin to find one’s image.) Fresh Widow mobilises painting’s mirror and window metaphors, and yet its obdurate presence as object is anti-metaphorical. This was unlike any painting seen before. Perhaps we might call it painting by other means? Or as the art critic David Joselit has called it, ‘painting beside itself’.

Keeley’s pictures are composites of views and objects assembled and visualised in computer software, later rendered in found and screen-printed fabrics stretched across wooden panels. Her miniature French windows, plausible constructions of real things, are blinded by fabric swatches, and yet perspective persists – in fact the organisation of her composite pictures are enthralled by perspective. If digital composition entails the view through another window – that of the LCD screen – the digital’s smoothness is disrupted when it meets resistant materials. Keeley’s work moves on from, or at least remembers, Studiolo or Versaille and their rebuttal in Duchamp’s Fresh Widow. It enfolds these things into its view, arriving at a sensuous, haptic optics: the door to the past is tipped ajar, closed and wide open.

Jonathan P. Watts is a critic based between London and Norfolk