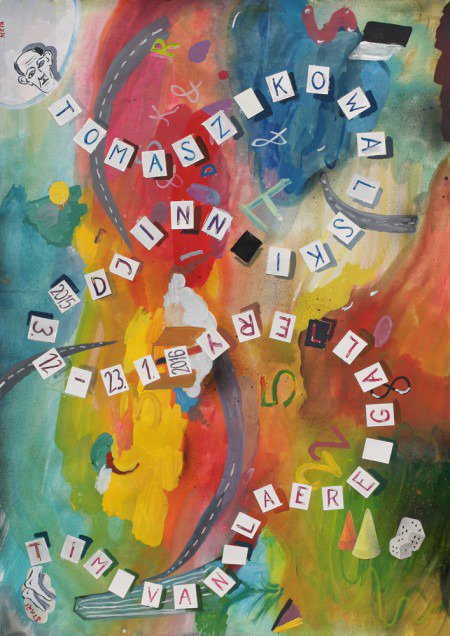 Tim Van Laere Gallery is pleased to present Djinn, Tomasz Kowalski's third solo exhibition with the gallery. Kowalski, who is a key figure among a new generation of Polish artists, will show nine paintings on canvas (mainly acrylic, occasionally acrylic and oil), 11 gouache paperworks, a sculpture, and three self-composed sound installations, all dated 2015.

The music reiterates Kowalski's personal investigation during the process of making the exhibition, the affective state that activated thoughts developing an image (and his images activating the sound as well). These pre-thoughts in turn became the short topics and stories for his paintings and drawings. Kowalski's work describes a microcosm of thoughts and feelings complete with its own laws. Depictions include a balding man (a future representation of the artist) stepping into an abyss of imaginary green paths and various elongated figures whose bodies multiply into infinite space. In several works, spiral-like figures appear, occupying interiors and landscapes of disjunctive temporalities.

His works disclose a terrain existing beyond the certainty of the boundaries between past, present and future, as new forms of knowledge and sensation are opened up. The work's multiple paths of exploration, through space and time, intermingle material and immaterial worlds engendering an entranced zone where the ghosts of the past and the future are constantly emerging.