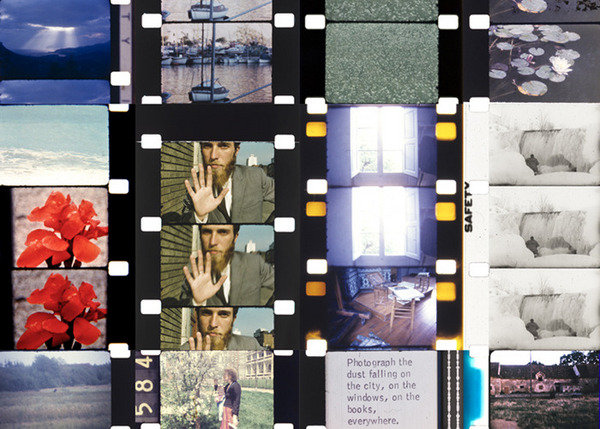 All these images, these sounds... These are the opening words of the first personal exhibition of Jonas Mekas (Biržai, 1922) at APALAZZOGALLERY.
These words of the Lithuanian poet and movie - maker prepare us to the waterfall of frames that fill the nineteenth - century halls of the gallery. Those words refer to all the images and sounds gathered by Jonas Mekas, after the invite of the curatorial duo Francesco Urbano Ragazzi, for The Internet Saga Project presented at the Biennale di Venezia 2015. So, this new exhibition is both its translation and a poetic development.
All the pieces exposed this year in Venice, come to a new life in Brescia, where the gallery is based. A new life that can be seen in In an Instant it All Can Back to Me , 768 original slides, 768 frames from the films realized between the '60s and the '90s, that for the first time in the artist's career are impressed on 32 monumental glass plates. There are also the three original editings of the Online Diary , a videodiary updated by the artist almost on a daily basis since 2006. An then, To Petrarca an audio piece composed of 51 tracks that record the life of the artist between little m oments of daily joy to important historical moments. And also Birth of a Nation a film that, on four monitors, distributes 160 portraits of the authors who made the history of experimental cinema - from Peter Kubelka to Michael Snow – accompanied by a photographic series of 40 elements never shown in Italy.
Describing who is Jonas Mekas is not easy. Founding father of New American Cinema, the Film - Makers Cooperative and Anthology Film Archives – maybe the biggest archive in the world dedicated to audiovisu al experimentation - is a key figure not only in the history of cinema, but also of art and literature. His story has its beginnings in a small village in Lithuania and then a temporal and geographical range so wide that it touches upon the Fluxus movemen t, the Beat Generation, Andy Warhol’s Factory until finally anticipating and foreseeing the post - Internet age.

After being sent to a labour camp in Elmshorn during World War II, Mekas arrived in New York in 1949. There he became the connector of a communi ty of artists which, to name a few of the encounters that Mekas’ camera records in its incessant activity, included: George Maciunas, Allen Ginsberg, Andy Warhol, Carolee Schneemann, Stan Brakhage, Kenneth Anger, Jack Smith, John Cassavetes, Yoko Ono, John Lennon and Velvet Underground. In addition to these great cultural and societal icons, however, routine moments from daily life are filmed and captured with the same intensity: a flower, a street, thunder during rainfall.
As such, Mekas' visual diaries c ompose a great tale that celebrates the course of existence between banality and lyricism. Until his arrival on the web in 2006, to take cinema beyond its limits. With all these images and these sounds, the exhibition celebrates Jonas Mekas, jonasmekas.com and the first ten years of the Internet life of a prophetic artist. Ten years that talk about a personal and historical transition from the independence of the cinema avant - gardes to the autonomy of the online fruibility, from the birth of the glorious Na tion of the Independent Cinema, to the origins of the Internet people.

“ All these images, these sounds” talks about many flowerings. A sequence of seasons and episodes that avoid the rigidity of the series and that take us in the neverending show of realit y, in rhythm with the pace of life. From the improvised choir at the Serpentine Gallery to the projection of Andy Warhol's Empire, passing through the Forest of Karlshrue and a Paul Sharits exhibition, a dinner with Agnes Varda in Paris, a lunch with his family, to the first day of the year for the classic speech at the Saint Mark's Church. And also flowers, animals, snow, lunar eclipses, wind and brief glimpses of beauty.

To keep it altogether there is the existence of the artist and of everything that pas ses through his lens. An intermittent circle that, from natural cycles to machines, goes throug correspondence to reality. The diary becomes cinema, Internet, building, gallery, life. On to a new season.

For the first time, the film scraps that Mekas uses to realize his photographic compositions are juxtaposed in a series of glass walls. Th rough a digital print process, the pictures selected by the artist, mostly unpublished, are impressed directly on glass, regaining the film transparency.
768 film - frames, scanned and isolated from Mekas' movies are assembled and recomposed on 32 glass wal ls, giving life to a big magical lantern that can be consulted as an archive. The images are set up in columns in a sort of grill through which the eyes catch what they’re interested in, similarly to what happens in the countless photogalleries that we usu ally scroll on our smartphones.
Throughout the 32 windows, that seem to recall the sacrality of a cathedral, there is a celebration of the flowing of life. This is a collection of instants, majestic yet simple, where the simplicity of flowers, sunsets, or stray dogs share their space with rare portraits of famous and not so known film - makers and artists such as Barbara Rubin, Peter Kubelka, Gozo Yashimasu. There are also extraordinary scenes like the ones shot during the strike organized by Salvador Dalì ag ainst the Mona Lisa in New York in 1963, or Yoko Ono and John Lennon’s performance Up Your Legs in 1970, or the opening ceremony of Andy Warhol at the Whitney Museum in May, 1971.
The 32 glass walls are presented in two different formats, recalling the dim ension of the windows in Palazzo Foscari Contarini in Venice, where they were presented as vinyl film transfers during the 56th Visual Arts Biennale.

Birth of a Nation , 4 channel video from 16mm film, 85 min col., 1997.
Birth of a Nation Family, 40 c - prin ts ed of 3+1 ap. 50.8 × 40.64 cm each , 2008.
This is the manifesto that Jonas Mekas wrote to introduce his 4 channel film installation: «One hundred and sixty portraits or rather appearances, sketches and glimpses of avant - garde, independent filmmakers and film activists between 1955 and 1996. Why BIRTH OF A NATION? Because the film independents IS a nation in itself. We are surrounded by commercial cinema Nation same way as the indigenous people of the United States or of any other country are surrounded b y Ruling Powers. We are the invisible, but essential nation of cinema. We are Cinema » . Music by Richard Wagner and Hermann Nitsch.
The film comes with 40 photo portraits, stills that eternalize some of the founders of this Country. The artist identifies th e group as his cinema family.

Online Diaries: 1. The First 40, video, 92.27 min, 2006 - 2015.
2. 365 Day Project, video, 93.47 min, 2007 - 2015.
3. Online Diary Selection , video, 110.51 min, 2008 - 2015.
Three absolutely unpublished editings of more than 500 vi deos that compose Jonas Mekas’ online Diary: The First 40, 365 Day Project, Online Diary Selection. Here the audiovisual notes that the artist posts almost on a daily basis are re - elaborated in three collections, three full - length films that with a specifi c cinema grammar register little intimate moments, meetings with artists and big stars, rhapsodic reflections given to the camera. The First 40 represents the first official passage that Jonas Mekas does towards the digital and it’s based on re - editings o f films from the ‘50s and ‘60s, but the digitalization for Mekas is more than a conservative process, it’s a creative act through which it’s possible to reminisce time and history once again. The artist says “the First 40 cycle that I realized at the end o f 2006 to introduce my new work to my new Internet audience is based on my first films, but with a little – sometimes not so little – change. I consider this work as a complete work separated from the main corpus of my works.”
The following year the artis t starts his 365 Day Project enacting a real cinema marathon. “In 2007 I posted, on a daily basis, videos that last between three and ten minutes. At the end of the project I shot a total of 38 hours that correspond to 20 films... it was the most difficult challenge I’ve ever done. It has a personal and anthropological (impersonal) value at the same time. You’ll see several images of me and my friends, different activities, meetings, lots of music, lots of events that I attended in New York and in Europe du ring that year. The most difficult challenge was shooting and immediately sharing all this with many friends around the world. Now I keep doing this but not everyday, with less pressure, on my website www.jonasmekas.com” The third monitor in the exhibitio n is dedicated to the constantly updated flow of the artist’s website from 2008 to the present. Last but not ultimate. It’s one of the countless possible editings of the online diary in progress of Jonas Mekas, which will celebrate its 10th anniversary in 2016.

o Petrarca , audio installation, 70 min. loop, 2003.
To Petrarca is a 70 minute symphony that alternates 51 tracks recorded between 1968 and 2001. Here, for instance, we can hear urban sounds taken in the streets of New York, poetic declamations and the sounds of Andy Warhol’s funeral wake. The title of the opera reminds us, in this context, of Petrarca’s failed attempt to transfer his personal library to Venice: the story of an encyclopaedic adventure that remains incomplete.The fragment and the dia ry are once again the preferred forms through which Jonas Mekas tells his own story.