His Centenary Birthday. With strikingly surreal arrangements, the artist produced a unique oeuvre that can be classified somewhere between naive painting, new objectivity, and magic realism. With over 200 loans originating from private collectors, the show provides a broad overview of Wassmer's work. 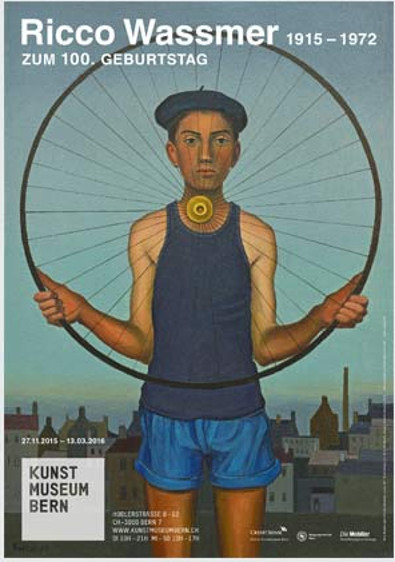 On the occasion of Ricco Wassmer’s 100th birthday (his real was name Erich Hans Wassmer, 1915–1972), the Kunstmuseum Bern is presenting a comprehensive retrospective of the work of this Swiss painter and photographer in an exhibition lasting from November 27, 2015, until March 13, 2016. With over 200 loans originating largely from private collectors, the show will be providing a broad overview of Ricco Wassmer's work. Many of the artworks have never before been shown in public—and the show includes newly discovered pieces too. The exhibition is focusing especially on the reciprocity of painting and photography, because the artist not only began using the camera as a substitute for drawing from live models, but the medium also acquired increasing significance from the 1950s onward. The show follows a chronological order and is based on the catalogue raisonné of the artist’s paintings and objects (Catalogue raisonné der Gemälde und Objekte). Betty Stocker began the research for the catalogue and Marc-Joachim Wasmer took over from 2008. The richly illustrated catalogue raisonné with a biography and a critical list of works has been published in conjunction with the exhibition in Bern.

Close ties with the Bern art scene linked to Kunsthalle director Arnold Rüdlinger
Wassmer was the son of an industrialist and spent his youth in the artistic milieu of Bremgarten castle. After studying in Munich and Paris, he returned to Switzerland in 1939. In 1948/49 he spent several months in Tahiti and then sailed as an assistant cook on a freighter around the world twice. From 1950, he lived part of the time in the heart of France near Vichy, but his bonds to the art scene in Bern in connection with Kunsthalle director Arnold Rüdlinger remained close. In 1963 he moved to Ropraz near Lausanne, and in 1972 he died aged 56 from the aftereffects of a pulmonary disorder.

Nostalgia and melancholy
Ricco Wassmer’s artistic career is closely linked to the “heroic years” of Bernese art, but even from the very beginning he stood out as an artist who explored new frontiers and as a rebel who found a voice in enigmatic paintings. Wassmer was a profoundly melancholy person who pursued an autonomous artistic path, off the beaten track of abstraction and the avant-garde. His pictures were his means of asserting himself and of expressing his homoerotic inclinations. Driven by his yearning for youth as the embodiment of the ideal world he experienced during his childhood, he painted encrypted still-lifes and scenes using cliché images of adolescence as well as objects, numbers, texts, and references from the visual arts.

Image structures based on fantasy and reality, dream and memories
Ephebus is the core topic of his work, and already in ancient Greece a cult was devoted to its worship. It signifies the turning point between male adolescence and maturity in the phase of emerging sexuality. In contrast to Otto Meyer-Amden before him, who illustrated the individual as merging ether-like with society and ritual, Ricco Wassmer depicted slender adolescents in the style of the old masters as if they were idols you could take hold of. From the 1950s onward, he worked almost exclusively after own photographs or those of others in a polished style, derived from the study of the works of Niklaus Stoecklin and Ingres as well as Max Ernst, Paul Delvaux, Man Ray, and Balthus. In his paintings fantasy and reality, dream and memories conflate into pictorial structures. In pursuing such an approach, Ricco Wassmer created his unmistakable visual vocabulary, corresponding with Harald Szeemann’s notion of “individual mythology.”