The exhibition looks at language politics as a form of etiquette in its written, oral, and visual registers. From medieval advice literature to the Russian avant-garde, "Stongue" examines language as a source of political, metaphysical, and even sexual emancipation. 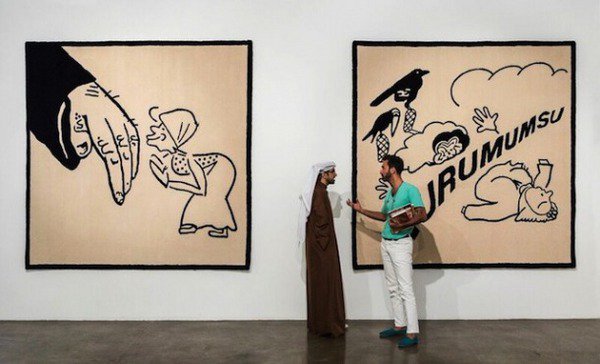 From medieval advice literature to Russian futurism, Stongue examines language as a source of political, metaphysical, and even sexual emancipation. The artist collective continues to probe "high highs and low lows" in their pathological interest in philology and its discontents. Their new film Deepthongs reflects on the various failed attempts, from Tsarist Russia to the Soviet Union, to cyrillicise non-Cyrillic-based languages, namely those of Muslim citizens but also, surprisingly, the Poles. The imposition of graphemes or letters onto phonemes or sounds is never a neutral act. Alphabets accompany empires: of land and peoples but also sounds and senses.

Scrawled across a rearview windshield of a Polski Fiat 126, a legendary car manufactured in Communist Poland, are the words "Chajda Chłopaki" (roughly translated as "Let's go, boys!" in an archaic, literary Polish). Weeping Window sets the tone for the exhibition with an anti-modernist trope, facing backwards to history, but moving forward towards the future, a recurring idea in Slavs and Tatars' practice. One found in their latter-day mascot Molla Nasreddin always seated backwards on his donkey or Sartre's description of Baudelaire, driving into the future with an eye on the rearview mirror.

For one year, Slavs and Tatars' work PrayWay has been permanently on display at Kunsthal Aarhus and has acted as a site of discussion, debate and gathering throughout the COLLECTIVE MAKING series. Slavs and Tatars' Stongue highlights the 2015–16 programme, developed by former Artistic Director Joasia Krysa, with a turn to language, a compelling case of collective action and individual thought.

Opening performance
On the opening day, Slavs and Tatars presented The Tranny Tease, a lecture performance exploring the potential for transliteration through the lens of phonetic, semantic and theological slippage.

Slavs and Tatars is a faction of polemics and intimacies devoted to an area east of the former Berlin Wall and west of the Great Wall of China known as Eurasia. The collective's practice is based on three activities: exhibitions, books and lecture performances. They have exhibited in major institutions across the Middle East, Europe and North America. Select solo engagements include MoMA, New York (2012), Secession, Vienna (2012), Dallas Museum of Art (2014), Kunsthalle Zurich (2014) and NYU Abu Dhabi (2015). The artists are nominated for the 2015 Preis der Nationalgalerie and 2016 Vincent Award.

Opens 9 December 17pm
Opening performance: Slavs and Tatars presents The Tranny Tease, a lecture performance exploring the potential for transliteration through the lens of phonetic, semantic and theological slippage.