For "Premonition of the Act" Rose English reconfigures elements of a major yet-to-be-realised performance. Her reputation for humorous and highly analytical actions began in the 1970s. In "with, and, or, without" Florian Roithmayr presents a new body of sculptural works which observe material transformations in the processes of making. 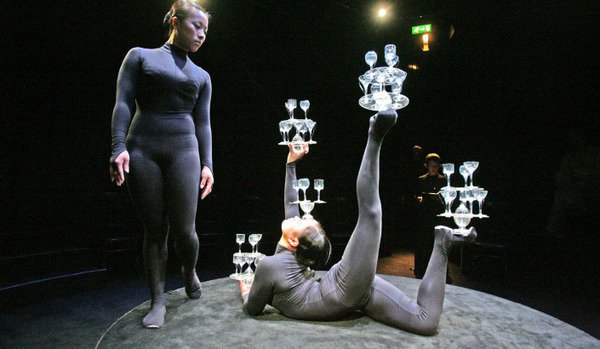 Rose English
A Premonition of the Act

Rose English’s reputation for humorous and highly analytical performance began within Britain’s vibrant feminist scene in the 1970s. An influential figure for many artists, her work has crossed boundaries between performed installation, vaudeville, film, spoken drama and opera in a mix of philosophical, aesthetic and political commentary.

For A Premonition of the Act English reconfigures elements of a major yet-to-be-realised performance. At its core is a new sound work, Lost in Music, an operatic piece for ten voices and percussion, scored by composer Luke Stoneham for English’s libretto. A chamber opera for Chinese acrobatics past and future, the music traces trajectories of their movements; the body and the breath, singing and glass-blowing, shattering and flying, together concertina time and space in a close investigation of the capacity for metaphysical embodiment of physical objects. English places her audience at the still point of the split between word and image, making songs solidify and objects sing.

Rose English has been writing, directing and performing her own work for over thirty five years. Her productions feature a diversity of co-performers including musicians, dancers, circus performers, magicians and horses. Rose’s shows range from her site-specific performances and collaborations of the 1970s including Quadrille, Berlin and Mounting, her acclaimed solos of the 1980’s including Plato’s Chair and The Beloved, to her large scale spectaculars of the 1990’s including Walks on Water, The Double Wedding and Tantamount Esperance. Abstract Vaudeville – the Work of Rose English, a monograph by Guy Brett with scripts by Rose English and interviews by Anne-Louise Rentell was published by Ridinghouse in 2014.

Florian Roithmayr
with, and, or, without

Florian Roithmayr presents a new body of sculptural works which observe material transformations in the processes of making. Capturing the unexpected gestures that occur in the interstice between mould and cast, the sculptures embody the consequences of one surface, material or body yielding another. The configuration of the exhibition will change daily at the inclination of the front of house team as Roithmayr sets up parameters before relinquishing control of the works.

Interested in labour that renders itself invisible upon completion, Roithmayr has undertaken intensive internships, shadowing engineering specialists such as a car surface decorator and a concrete beautician, who manipulate materials to perform beyond their physical expectations. The sculptures act not as discrete objects but as representations of an accumulation of research, process and production.