Catalonia in Venice. Singularity. The exhibition features a large-scale audiovisual installation, with eight screens for the projection of Serra's film on the relationship between humanity and technology. 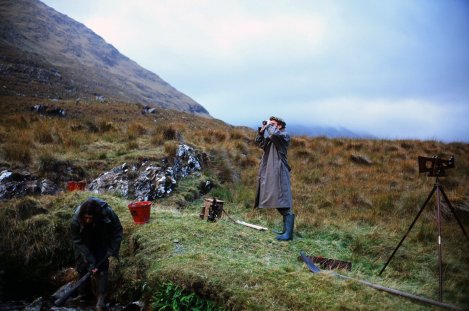 Singularity arrives at La Virreina Image Centre under a new form. For this presentation in Barcelona, three new screens have been added to the original five that comprised the film's installation as produced by Catalan filmmaker Albert Serra in Venice. Curated by Chus Martínez, the project represented Catalan art at the 56th edition of the Venice Biennale, as part of the Collateral Events.

The exhibition features a large-scale audiovisual installation, with eight screens for the projection of Serra's film on the relationship between humanity and technology. Over more than eight hours long, and presented here in a revised format from what was premiered at the Venice Biennale last May, the film seeks to reflect upon human relationships with the non-human.

The original inspiration of this proposal was the discussion between the artist and the curator on the concept giving the work its title. Singularity is the term mathematicians and researchers interested in artificial intelligence use to refer to the moment our relationships with machines begin to change—when technology is no longer just a tool and becomes a companion to the human species. But what does the term refer to in this particular installation? In Singularity, it designates a modern condition, defined not only by the circumstances of capital and the economy, but also by a new epistemological turn where we share our lives with machines and nature in a different way.

After its successful presentation in Venice, this project is now being shown in Barcelona, with the goal of raising the visibility of proposals representative of current creation in the Barcelona context. For the second consecutive year, and in collaboration with the Institut Ramon Llull, La Virreina Image Centre presents a project previously seen at Venice's stellar event in contemporary art.