Critical Reflections on the Imagination of Asia. 70th Anniversary of the Atomic Bombing. The exhibition features 16 artists' works, many are new, other were initiated in the first show in Seoul. These works-in-progress will be further developed throughout the project. 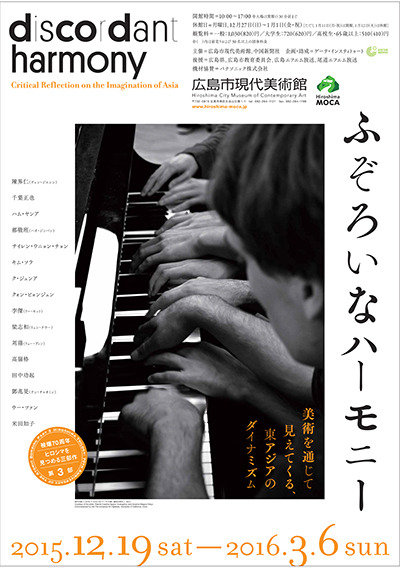 The second exhibition of the Discordant Harmony project takes place in Hiroshima City Museum of Contemporary Art from December 19, 2015 to March 6, 2016 as a part of a trilogy of exhibitions by the Museum in observing the 70th anniversary of the atomic bombing.

In 2013, the Goethe-Institut invited curators from Japan, China and Korea to explore the notion of "harmony" often attributed to Asia. The exhibition Discordant Harmony is the result of this endeavor, aiming to widen the opportunities for dialogue concerning the ever-changing state of "harmony" in the East Asian region via artworks, research and other activities. The exhibition was first presented in Seoul and will travel to Taipei in July 2016.

While East Asia is the scene of lively and mutually attractive and influential personal and cultural exchanges, it is also a region beset by never-ending political conflicts. The "harmony" of this exhibition is a movement consciously seeking to build a cooperative framework, and can at times manifest as pressure in opposition to diversity. In this exhibition, we view the works created by the artists as mirrors reflecting an age in the midst of change, and through artistic expression closely linked to society, we seek to explore the here and now of East Asia from the ground of Hiroshima.

Just as a single historical phenomenon can be understood differently if viewed from different positions, there is an increasing demand today for the imagination to recognize and accept that there are diverse perspectives on all things. In Hiroshima, where the ravages of the A-bomb attack are part of the city's memory, by looking back on the past and thinking about the future, we will consider through art the issues affecting society today that will help us cultivate new relationships.

Discordant Harmony is curated by Chien-Hung Huang, Yukie Kamiya, Sunjung Kim and Carol Yinghua Lu. The exhibition features 16 artists' works. The show presents many new works which are on public view for the first time, as well as works that were initiated in the first show in Seoul for the Discordant Harmony project. These works-in-progress will be further developed throughout the project.