This exhibition brings together more than 170 works (photographs and videos) as well as documents, together constructing a complete retrospective organised into a series of different sections with a chronological and thematic structure on Chile's political and social situation. 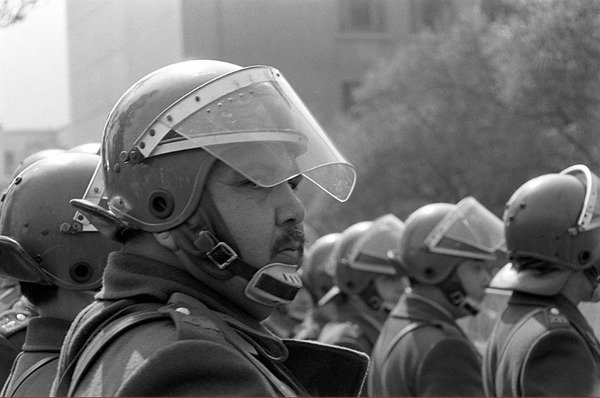 Any study of the extensive photographic oeuvre of Paz Errázuriz (b. 1944, Santiago, Chile) will reveal its constant references to Chile's political and social situation. Since the 1970s and following Pinochet's coup d'êtat and the brutal imposition of his dictatorship, Errázuriz turned her gaze onto the street in a quest for replies to the deafening silence. Over the years, she has found them in the faces of numerous individuals, photographed in black and white, who did not comply with the norms of social behaviour: outcasts sleeping rough, men and women confined in psychiatric hospitals, members of shabby circuses and crossdressers harassed by the police.
In 1981, Errázuriz again expressed her commitment to society and to collective endeavour by co-founding the Asociación de Fotógrafos independientes (AFI) with various other photographers.

Her career has been a notably unconventional one: a self-taught photographer, Errázuriz began with no reference points or prior models, motivated instead by the pressing need to explore human realities on the margins of hegemonic representations. As her career has developed, her documentary photography can be seen as the result of an unusual working method based on co-existence with her subjects, on the trust generated by this proximity, on shared time and mutual respect.

Chile's return to democracy in 1990 did not diminish Paz Errázuriz's investigative powers. Her feminist convictions, already expressed in the previous decade, led her to undertake a new series that emphasized the working lives of Chilean women. This was also the period when she met Jérwar-asáwer, a direct descendent of the Kawésqar ethnic group from Tierra del Fuego, with whom Errázuriz maintained a close friendship that resulted in the series "Los nómadas del mar [Nomads of the sea]," in which she depicts fragments from the lives of an indigenous people and a culture in the process of dying out.

Errázuriz's most recent output continues to focus on difficult subjects and unusual stories. This is the case with the series "La luz que me ciega [The light that blinds me]," which looks at the daily life of individuals suffering from achromatopsia, as well as the series of colour photographs on female prostitution entitled "Muñecas, frontera Chile-Perú [Dolls, the Chile-Peru border]".

Above all, Paz Errázuriz's gaze is notable for the way it delves into the most unsettling nooks and crannies of Chilean daily reality, giving rise to a micro-politics of the image involving a wide range of subjects whose life experience, located outside the prevailing norm, challenges viewers by breaking down preconceived ideas.

This exhibition brings together more than 170 works (photographs and videos) as well as documents, together constructing a complete retrospective organised into a series of different sections with a chronological and thematic structure.