Leonor Antunes presents a new series of sculptural installations commissioned for the central Nave of the museum. This exhibition, borrows its title from Anni Albers's 1957 essay "The Pliable Plane". In "Letters from Panduranga", Nguyen Trinh Thi extends her experimentation between documentary and fiction in an essay film portraying a Cham community. 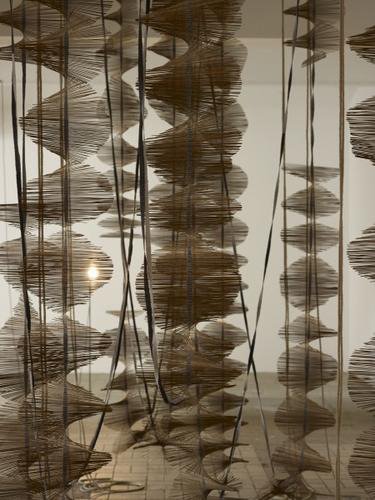 The central Nave of the CAPC musée d'art contemporain de Bordeaux is the emblematic space of its patrimonial building and has been the hosting place of memorable exhibitions which have accompanied the history of contemporary art.

The CAPC musée has commissioned Leonor Antunes a series of sculptural installations to be displayed in the Nave of the museum, with the aim of shedding a new light on this magnificent space. As Antunes says, she wishes to "shift the space of the museum, from one impressive dimension to a more human scale, allowing the visitors to embody themselves in her installation thanks to a closer relation with the works."

For this exhibition, borrowing its title from Anni Albers's 1957 essay "The Pliable Plane," the artist will occupy the 1,500 square meters of the floor of the Nave and display around, and above, this monumental space a series of large scale works, some of them inspired by Anni Albers's fabric designs, others informed with Lina Bo Bardi's architectural work. Leonor Antunes's works will enter a dialogue with the building, echoing both the commercial history of this 19th century construction and the cultural legacy of modernism.

This exhibition is made possible thanks to the support of our honorary patron, Château Haut-Bailly.
It is also supported by galleries Air de Paris and Luisa Strina, Wicanders, The Friends of the CAPC and the Embassy of Portugal in France - Centro cultural Camões I.P.

Nguyen Trinh Thi (Hanoi, 1973) is an artist and filmmaker. She studied journalism and photography at the University of Iowa; and International Relations and Ethnographic Film at University of California, San Diego. Nguyen is the founding Director of Hanoi Doclab (2009), a center for documentary filmmaking and video art in Hanoi, where she continues to teach today.

Nguyen's Letters from Panduranga (2015), extends her experimentation between documentary and fiction in an essay film portraying a Cham community living on the most southern and last surviving territory of Champa, an ancient kingdom dating back nearly two thousand years and conquered by Dai Viet (current day Vietnam) in 1832. The area of Ninh Thuan, once known as Panduranga, is the spiritual center of the Cham's ancient matriarchal culture.

This exhibition is co-produced by Jeu de Paume, Paris, F.N.A.G.P. and CAPC musée d'art contemporain de Bordeaux. The Friends of the CAPC contribute to the production of the artworks in this programme.