People and Places-Photographs from 40 Years. Otto Breicha-Award 2015. In the street, in bars and cafes, in railway stations and taverns, Kandl's camera paints a portrait of society and creates a documentary record of the world around him. 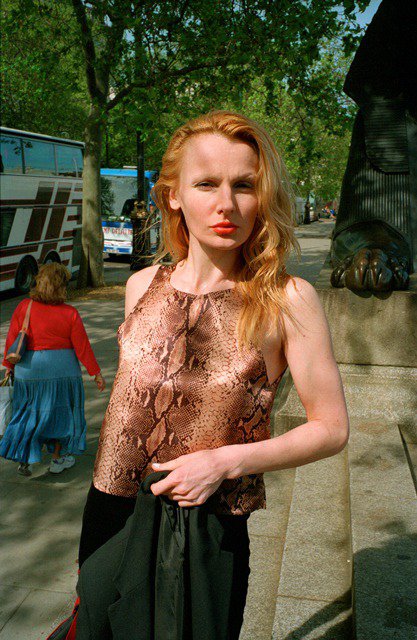 The Museum der Moderne Salzburg is delighted to honor Leo Kandl (b. Mistelbach, 1944; lives in Vienna) with this year’s Otto Breicha Award for Photography. A reticent and sensitive observer, Kandl has travelled the world and returned with pictures that attest to his encounters. The photographs of the Weinhaus series from the 1980s tell stories of people on the margins of society and bear moving witness to life in the twilight of cheap wine bars, railway station fast-food joints, and dives along Vienna’s outer beltway. In the 1990s, Kandl studied the culture of individual styles of dress as a vestigial form of human existence. His “jacket” photographs are documents of the wearers’ simultaneous presence and absence.

Passersby and chance encounters are a recurrent motif in Leo Kandl’s oeuvre. He started out capturing anonymous portraits in the streets; in later years, he also arranged to meet his models by posting classified ads and personals. Around 2000, he launched the series Free Portraits, in which the pictures are the result of extensive preparations and appointments with volunteer “models” he has never met before.

A study visit to Iran in 2003 led Kandl to take an interest in urban landscapes and peripheries. The anonymity of places and the “atmosphere of the overlooked detail” also inspired his visual research in Moldavia and Ukraine. Closer to home, he roams Vienna’s neighborhoods, taking pictures of unspectacular streets, residential developments from the 1970s, kiosks, and tobacconist’s stores in which he glimpses geometrical composition and architectural serendipity.

With around a hundred exhibits, the exhibition will present an overview of Kandl’s oeuvre since the 1980s. The works on view are selections from the museum’s own holdings complemented by new pictures related to his Free Portraits series.

A brochure with essays by Sabine Breitwieser and Margit Zuckriegl will be published on occasion of the award ceremony.