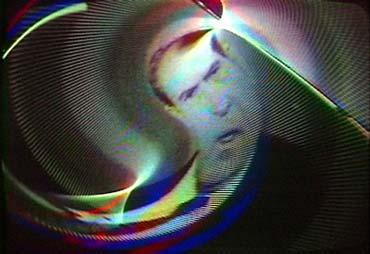 Global Groove 2004 Nam June Paik's celebration of our media artworld will transform the Deutsche Guggenheim galleries from April 17 to July 9, 2004 into a dynamic space of surfaces and screens filled with moving images. Global Groove 2004, Paik's first major art installation since his laser projects created for his retrospective The Worlds of Nam June Paik at the Guggenheim Museum, New York, celebrates his return to Berlin the site of many of his triumphs as an artist.
Global Groove 2004 takes its title from Paik's legendary videotape Global Groove (1973) which proclaimed the future of a global artist's television. Broadcast in 1974 on WNET/Thirteen in New York, Nam June Paik's multifaceted Global Groove, would become one of the most influential and legendary examples of video art. Global Groove took an all-encompassing view of culture that epitomized Paik's approach to television and the medium of video for broadcast. It transformed the broadcast studio into an experimental venue for dancers, musicians, and performance artists. Global Groove integrates and unites diverse elementsâ€” films and videotapes by other artists, interviews and voiceovers (including appearances by Allen Ginsberg and John Cage), pop music, appropriated commercials and broadcast fragmentsâ€”in a series of short segments driven by a rapid, energetic pace and comprehensive image processing.
In celebration of the thirtieth anniversary of the Global Groove broadcast, Global Groove 2004 presents an installation that will feature Paik's global television projects from the late 1960s and 1970s. Re-mixed with Global Groove will be the single channel works 9/23 Experiment with David Atwood (1969), Suite 2112 (1977), and Merce by Merce by Paik (1975-78), all of which celebrate his distinctive image processing and his collaborations with the likes of John Cage, Merce Cunningham and Allen Ginsberg. The exhibition's installation utilizes elements of Paik's signature ''videowalls'': projection cubes installed in compact grids for the purpose of cacophonously orchestrated video screenings. Global Groove 2004 features videowall components, originally installed at the Guggenheim Soho in New York, organized into new architectural elements, creating a dynamic environment in which to encounter a remix of Paik's work in video and for television. Encircling these elements of moving images is One Candle (Candle Projection) (1988, 2004 version), one of the artist's closed-circuit works. A video camera captures the moving image of a burning candle, which is projected large-scale onto all four walls of the gallery. The flame creates a vibrant background matching the immediacy of the electronic image.
In Global Groove 2004 the artist reflects on his lifetime of creative innovation and generates a dynamic new media art environment in the Deutsche Guggenheim galleries.
Nam June Paik: Global Groove 2004 was curated by John G. Hanhardt, Senior Curator for Film and Media Arts, along - with the assistance of - Caitlin Jones, Project Assistant for Film and Media Arts at the Guggenheim Museum in New York. Accompanying with the exhibition is a two-part catalogue with essays by the curators in German and English as well as with a reprint of the previously out-of-print publication Nam June Paik: Videa'n' Vidoelogy 1959-1973, at a price of euros 26. The Cibachrom print Global Groove 2004 was created in a limited and signed edition of approx. 15 copies plus 5 copies a.p. as Edition No. 27 of the Deutsche Guggenheim. Nam June Paik contributed sketches to the setting-up of the installation in the exhibition spaces Unter den Linden. The Edition is available exclusively in the MuseumsShop at a price of euros 3,500.
The exhibition is accompanied by an extensive program. In the Curator's Talk, John G. Hanhardt guides a tour through the exhibition Global Groove 2004 on Monday, April 19, 2004 at 6 p.m. The tour takes place in English.
A conversation between John G. Hanhardt and Prof. Dr. Wulf Herzogenrath, Director of the Kunsthalle Bremen, on Friday, April 23, 2004 at 7 p.m. devotes itself to the theme of the works of Nam June Paik. Both art historians have accompanied the work of Paik over several years in scholarly publications and as curators.
On Thursday, April 29, 2004 at 7 p.m. the Ensemble Ki presents under the title Written/not Written â€“ Cello and Percussion in Unwritten Music works by Elliot Carter and John Cage as well as by Thomas Seelig and Fabien LÃ©vy.
The traditional Family Brunch takes place on Sunday, May 9, 2004 at 11:30 in the Deutsche Guggenheim. During the time when adults are taking a guided tour with the theme ''Cool'' and ''Hot'' Media in Global Groove, children discover the world of Nam June Paik in a playful manner.
During May and July 2004, the film series Paik and the Worlds of Film and Video, 1965-1974 features films by Nam June Paik which were created in collaboration with Jud Yalkut, and also his early video works. An additional selection of films by Robert Breer, Michael Snow, Stan VanDerBeek et al. places Paik's works in the context of American avant-garde cinema. The film program is being presented in cooperation with the Kino Arsenal.
Free guided tours through the exhibition are offered daily at 6 p.m. The lunch lectures will take place every Wednesday at 1 p.m. The keynote tours are held on Sundays at 11.30 a.m. and are followed by a brunch.
The exhibition and program represent a contribution to the american season.
The video wall components for Global Groove 2004 are made possible by Samsung Electronics.