Modigliani: Beyond the Myth

A retrospective. Works since the 1951, more than 80 paintings, sculptures and drawings 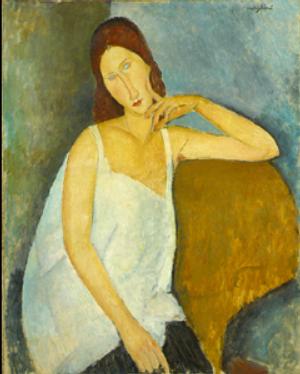 For the centerpiece exhibition of its centennial year, The Jewish Museum will present Modigliani: Beyond the Myth, New York Cityâ€™s first major exhibition of the artistâ€™s work since the 1951 retrospective at The Museum of Modern Art. On view from May 21 through September 19, 2004, the exhibition will re-examine the full range of the work of Italian Jewish painter and sculptor Amedeo Modigliani (1884-1920).

Featuring over 100 paintings, sculptures and drawings on loan from collections in the United States, Canada, Europe, South America, Japan, Israel and Australia, Modigliani: Beyond the Myth will place the artist within the development of European modernism and consider how his background as an Italian Jew of Sephardic ancestry contributed to the development of his singular style, which melded formal innovation with a variety of historical models from Egypt, Africa, Asia and classical antiquity. While tightly focused on Modiglianiâ€™s artistic achievement, the exhibition also situates him precisely within his social and cultural context.

Known primarily for his paintings of reclining nudes and his portraits with elegantly elongated features, Modigliani was an anomaly among the artists (many of them foreign-born Jews) who were active in the Parisian avant-garde in the early 20th century. On the one hand, he remained independent of the eraâ€™s many artistic movements. On the other, his bohemian way of life (and untimely death) made him into a legendary figure, whose reputation has obscured the meaning of his work.

After its presentation at The Jewish Museum in New York City, Modigliani: Beyond the Myth will travel to The Art Gallery of Ontario in Toronto (on view October 23, 2004-January 23, 2005) and The Phillips Collection in Washington, D.C. (on view February 26-May 29, 2005).

The Jerome L. Greene Foundation is the sole sponsor of Modigliani: Beyond the Myth.

When Modigliani died of tuberculosis in 1920, at the age of thirty-five, he became the standard-bearer for the myth of the bohemian artist â€“ the unappreciated ''artist-genius'' consoled by wine and drugs. This celebrated myth is based on details of the artistâ€™s life; his volatile personality, extreme poverty, chronic ill health, and the suicide of his twenty-one-year-old pregnant lover, Jeanne HÃ©buterne, the day after his death. Such biography does little to further understanding of the man or his art. The story of Modiglianiâ€™s life has eclipsed his work, severing it from the ideas and cultural traditions that might otherwise reveal its many meanings. Such mythmaking has made one of the best-known early modernist artists one of the most misunderstood.

Arriving in Paris in 1906, Modigliani was proud of his Italian and Sephardic roots, his intellectual upbringing, and the liberal social and political ideals espoused by his mother, Eugenia. Not only did she approve of the Socialist ideas that led to the arrest of Modiglianiâ€™s eldest brother, Emanuele, she had caused a scandal within the family when she started working in 1886. The Italian Jewish community that shaped the artist differed from other Jewish communities throughout Europe, which remained comparatively isolated and resistant to change. Cultural mingling, however, developed naturally in Livorno, which did not have a ghetto. It is significant that Modigliani, lacking an Eastern European accent, was identified as Italian, whereas artists such as Marc Chagall and Chaim Soutine were perceived first as Jewish rather than Russian. His fluency in French further concealed his ethnicity and caused him to deliberately call attention to this own Jewishness, often introducing himself, ''I am Modigliani, Jew.'' As an artist, he refused to align himself with any art movement or manifesto, limiting himself almost entirely to the practice of portraiture.

Modigliani has been typecast as the paradigmatic figure of the Circle of Montparnasse, the group of Jewish artists who immigrated to Paris shortly before World War I. Modigliani: Beyond the Myth rethinks the artistâ€™s unique social and religious history in relationship to his singular preoccupation with portraiture. It focuses on the ways in which Modiglianiâ€™s concern with identity and individuality set him apart. The exhibition reconceives the artist and his work in the context of the universalist ideals to which he had been exposed in his youth, and in the complex ways he responded to the difficult social realities that he faced as a Jew in Paris (including anti-Semitism, which he experienced for the first time in Paris).

The exhibition is divided into six sections: ''Caryatids'', ''Sculpture'', ''Return to Painting'', ''Portraiture'', ''Montparnasse'', and ''Nudes,'' and begins with several examples of the brooding femme fatale of Modiglianiâ€™s early Symbolist work such as The Jewess or Nude with a Hat (1908). The ''Caryatids'' section reveals this female-gendered column or pilaster in architecture to be a key metaphor for the artist. Two paintings, Red Bust and Large Red Bust (1913), in this part of the exhibition appear as static Byzantine icons. The ''Sculpture'' section examines a series of carved heads in a range of historical and cultural archetypes â€“ Archaic Greek and Cycladic, African and Egyptian, early Christian and Khmer. As he altered the anatomical details of these heads, Modigliani submitted the figure to a modernist geometric idiom in order to contrast the universal with the individual traits of portraiture. ''Return to Painting'' marks the point at which Modigliani ceased making sculpture in 1915 because of difficulties posed by the war, the cost of stone, and most significantly, his failing health. The artist now focused on the nature and ambiguity of identity. In the ''Portraiture'' section, Modiglianiâ€™s exclusive practice of portraiture has become a vehicle for his egalitarian vision, which presented all people equally regardless of their station, and was based on the Socialist ideas that were championed during his childhood. His use of both mask and abstract pictorial terms gives his portraits their enigmatic quality, and mirrors his unique experience of ethnic anonymity. Through such distancing devices, he protects the private individualâ€™s persona while still enabling his sitters to reveal themselves. The ''Montparnasse'' section of the exhibition explores how, during World War I, when most of the public areas of Paris closed down, the CafÃ© de la Rotonde became an important center of social and intellectual refuge for artists who remained in Paris. It was there that Modigliani drew his fellow Ã©migrÃ©s such as Pablo Picasso, Diego Rivera, Jacques Lipchitz, and MoÃ¯se Kisling, whose depictions, profusely gathered in this gallery, bring to life the immediacy of the artistâ€™s technique. Amedeo Modiglianiâ€™s best-known works are more than two dozen female nudes he painted between 1916 and 1919. These again exemplify his position between tradition and modernism. The final section of Modigliani: Beyond the Myth presents five of these works originally found to be obscene when shown in the artistâ€™s first (and only) one-person show in December 1917. The figures are displayed boldly, with only the faintest suggestion of setting. Languourously outstretched, neither demure nor provocative, they are depicted with a degree of objectivity. Yet it was the way in which Modigliani reduced the female body to its essential sculptural aspect, to abstract it while focusing on its details, that shocked viewers at the time.

To continue to view Modigliani as representative of this group (the Jewish artists in Montparnasse) only ''...perpetuates an overriding tendency in art history to absorb cultural difference in order to preserve a particular narrative of historical or stylistic cohesion,'' exhibition curator Mason Klein states in his catalogue essay. He continues ''.....That the artistâ€™s stylistic diversity can be a microcosm of the cultural amalgam of Montparnasse says very little about his work; it fails to tell us that behind Modiglianiâ€™s ostensible inclusiveness was an artist who insisted on difference, on individualism, and whose habitual unwillingness to join â€˜othersâ€™ related to his refusal to assimilate.'' As opposed to the need of the Ã‰cole FranÃ§aise to ''...render a pure identity of France, Modiglianiâ€™s idealism is born of his Livornese heritage and based on a cultural pluralism and religious humanism eloquently espoused among nineteenth-century intellectual circles of Sephardic Livornese.'' In his essay, Mason Klein concludes that Modiglianiâ€™s ''...body of work represents a set of values that echoes one of the high notes of Sephardic humanism in Italyâ€™s long religious history.''

Modigliani: Beyond the Myth has been organized by Mason Klein, a curator in the Fine Arts Department at The Jewish Museum.

An illustrated catalogue, co-published by The Jewish Museum and Yale University Press and edited by Mason Klein, contains essays by the curator and Maurice Berger, Emily Braun, Tamar Garb, and Griselda Pollock, and 237 illustrations (188 in full color and 49 in black and white). The 256-page book will sell for $50 (hardcover) at bookstores worldwide. In addition, a softcover edition will be available only at the three exhibition venues for $34.95.