Can't see past my own eyes. Possibly the best-known contemporary artist in Britain, Tracey Emin makes autobiographical work that unflinchingly and tenderly examines her own often-traumatic experiences growing up in the English seaside resort of Margate. Through frankly sharing the minutiae of her own life, Emin addresses some of the most basic issues that affect us all sexuality, relationships, mortality, identity. 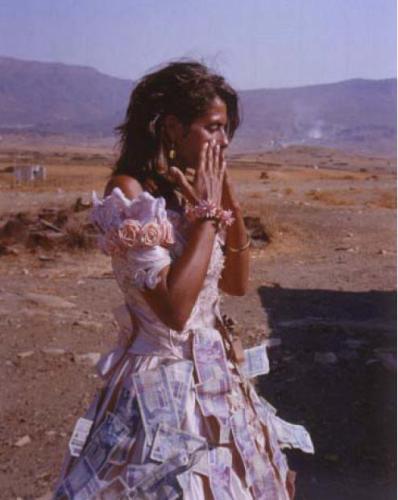 Can't see past my own eyes.

Most of my work starts off with me, or an experience with me, or something I ve witnessed, but then it transcends from me so other people relate to it.
Tracey Emin ( Parkett, issue 63, 2001)

Possibly the best-known contemporary artist in Britain, Tracey Emin makes autobiographical work that unflinchingly and tenderly examines her own often-traumatic experiences growing up in the English seaside resort of Margate. Through frankly sharing the minutiae of her own life, Emin addresses some of the most basic issues that affect us all sexuality, relationships, mortality, identity.

Memorable for not winning the Turner Prize in 1999 (in spite of her work being the most talked-about in that year s shortlist), Emin has created a considerable number of now-famous works including the notorious embroidered tent, Everyone I Have Ever Slept With 1963-95 (1995); a book about her childhood, Exploration of the Soul (1994); The Tracey Emin Museum, located in a former mini-cab office in Waterloo (1995-98); her shop, co-owned by fellow British artist Sarah Lucas (1993); and an installation of her actual bed, My Bed (1998), now a centrepiece of the Saatchi Collection.

Emin s work has manifested itself in a plurality of media including printmaking, drawing, painting, installation, textiles, photography, film, and video. She has already created 20 films and videos, and it is on this body of work that the sketch exhibition focuses. Emin s use of the medium is extremely appropriate as it references both popular culture/music videos (particularly in the succinct length of her videos) as well as home movies (suggested in the handmadeness of her production values). Deliberately carefree, Emin s videos are as confrontationally confessional as the rest of her work. The repeated and honest use of her own image allows the viewer to see her vulnerability and the imperfections of her physical appearance. Critic Julian Stallabrass writes that it is, how she speaks rather than what she says; it is not just her voice but also her body movement that matters. There is a realness in seeing Emin, warts and all, and it is this authenticity in her work that many viewers have so strongly responded to. The documentary nature of video reinforces the content of the work, which often serves as documentation of Emin s life as revealed through her coming-of-age stories.

Located at the intersection between high and low culture, ordinariness and celebrity, humour and tragedy, Emin s work is accessible, her candidness and down-to-earth storytelling offering the viewer an easy route into the art. Emin s videos are surprisingly traditional in their narrative structure, and in relation to other video art, unusually mainstream. Emin s apparent naÃ¯vetÃ© conceals an unbelievably clever, shrewd, and thoughtful approach to art-making. Truth is such a transient thing, says Emin, it s like with my work, people say, Oh, the honesty and the truth behind it but it s all edited, it s all calculated, it s all decided. I decide to show this or that part of the truth, which isn t necessarily the whole story, it s just what I decide to give you (in an interview with Lynn Barber, The Observer Magazine, 22 April 2001).

Tracey Emin was born in London in 1963 and grew up in Margate. She received a BA from Maidstone College of Art, after which she studied at the Royal College of Art. Emin was included in such seminal young British art exhibitions as Brilliant: New Art from London (Walker Art Center, Minneapolis, 1995), and Sensation (Royal Academy of Arts, London, 1997). She has held numerous solo exhibitions around the world in both commercial galleries and museums, including major shows at Kunsthaus MÃ¼nich and Modern Art Oxford. Tracey Emin currently lives and works in London. She is represented by White Cube. New

New works by Tracey Emin at sketch:
sketch is pleased to announce that Tracey Emin is creating several new pieces for her exhibition at the gallery, including a new video to be shown in the gallery in the evening, as well as a new photo and two new neon works to be installed at sketch.

Tracey Emin is also currently working on a feature-length film based on her childhood in Margate.