Walls of Light. A selection of works from the late 1930s and early 1940s demonstrates the artist's early influences, which by mid-decade incorporated abstract Surrealist techniques and images in a painting style often reflective of mythological content and religious iconography. A self-contained group of Multiform Paintings, from the late 40s, marks the onset of an approach based on sheer colors in space. 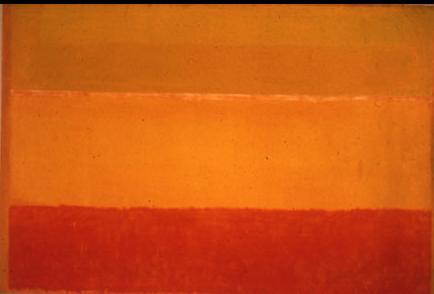 Born Marcus Rothkovitz in Dvinsk, Russia, in 1903, Mark Rothko emigrated with his family to the U.S. in 1913, settling in Portland, Oregon. Rothko attended Yale University on scholarship from 1921 to 1923, when he left without a degree and moved to New York. He began to paint in 1925 and had his first solo show in 1933. He continued to refine his technique as he developed his famous mature style in the late 1940s and early 1950s. Since his tragic death in 1970, his art has continued to enjoy undiminished popularity. Today Rothko counts among the great pioneers of American postwar art and, alongside Barnett Newman and Jackson Pollock, as one of the major representatives of Abstract Expressionism.

In 2003, to mark the hundredth anniversary of Rothko's birth, the Beyeler Foundation, Basel, in collaboration with the artist's children Kate R. Prizel and Christopher Rothko, installed a sequence of Rothko rooms, now on view in an extended version at the Guggenheim Museum Bilbao. The exhibition features a representative cross-section of works from all phases of Rothko's career and provides a moving homage to the artist and his work.

A selection of works from the late 1930s and early 1940s demonstrates the artist's early influences, which by mid-decade incorporated abstract Surrealist techniques and images in a painting style often reflective of mythological content and religious iconography. A self-contained group of Multiform Paintings, from the late 40s, marks the onset of an approach based on sheer colors in space.

Rothko's mature style explored the expressive potential of stacked rectangular fields of luminous color that seem to hover on the canvas surface. The gallery of paintings from this period features Untitled (1952â€“53) which, with its enormous dimensions â€”300 cm high by 442.5 cm longâ€” provides overwhelming evidence of Rothko's desire to open up new spatial dimensions through his art. Because of his preference for painting on a large-scale, Rothko was frequently described as a mural painter, and many of the commissions he began to receive were for monumental paintings and murals. He believed, 'However you paint the larger picture, you are in it. It isn't something you can command.'

While critics praised the artist as a sensualist and a colorist, for him the canvases enacted a violent battle of opposites â€”vertical versus horizontal, hot color versus coldâ€” invoking the existential conflicts of modernity. The Black on Gray Paintings, begun the year before the artist's suicide, confirm Rothko's belief that his work encompassed tragedy. Designated Untitled by Rothko himself, these works marked a new departure. All of the paintings in this series are horizontally divided: a lower half, rendered in gray or occasionally brownish gradations, is set off from an upper, black half. Often the two fields are shot through with strongly gestural brushwork. Especially at the meridian, the strokes are visibly agitated, and despite the impression of a sharply defined horizon, gray and black intermerge. But the compositions' most striking trait is a narrow white framing band used to edge every painting in the series except one. This emphasis on the actual picture boundaries serves to augment the impression of a picture within the picture. And it contributes to the predominant sense we as viewers have of no longer seeing color fields set within a picture but a picture brought into identity with its own flatness. At the same time, however, the compositional reduction to a single horizontal division also calls up associations with landscape, as if we were gazing over the edge of a planet into a black void. In this case the white frame conveys the impression of a window opening on to some unknown reality. It is safe to assume that Rothko consciously toyed with these two contradictory effects. One striking result is the distance this creates between painting and viewer. The viewer no longer feels drawn into hovering color fields that appear to extend into his own space, as in earlier works, but confronted by a heightened presenceâ€”an iconic starkness.