Mr Mkhneze's portrait and other stories from the New South Africa. Mr. Mkhize has only been photographed twice before in his life. The first was for his pass book, a document which the Apartheid Government used to control his movements, the second was for his ID book, that allowed him to vote in the first democratic election in 1994... Donovan Wylie: The Maze. This exhibition is an exploration of The Maze, a prison 10 miles outside of Belfast that has played a unique role in the Northern Ireland troubles. Built alongside the Long Kesh Internment Centre, it was conceived as a maximum-security prison for political prisoners responding to escalating violence. 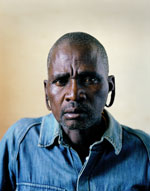 Adam Broomberg and Oliver Chanarin:
Mr Mkhneze's portrait and other stories from the New South Africa

Mr. Mkhize has only been photographed twice before in his life. The first was for his pass book, a document which the Apartheid Government used to control his movements, the second was for his ID book, that allowed him to vote in the first democratic election in 1994. Earlier this year Adam Broomberg and Oliver Chanarin met him at his home in Madala Hostel in Alexandra township and took his portrait.

Talking about his life he said: "I came here when I was a boy. You left home and came to the city to look for work. I lived alone in this hostel. Alone with 400 other men, eight of us in a room together. It was dangerous in those days. The football field outside was often covered in blood. There was a war between many of the locals and many of us that came from far away. It's different now. My wife lives with me for the first time in our married life." (Top Image)

The struggles in South Africa have usually been photographed and witnessed on a very public, and therefore spectacular, scale, however Adam Broomberg and Oliver Chanarins' project was a very personal voyage, as they returned to work in their homeland after a long absence. Over the past few months they have met and photographed a wide range of people and places across the country from Xhoi bushmen, Jewish old-age pensioners, cadets in police-training camps and prison inmates.

Originally they were commissioned by the South African Government to record the stories of individuals who had taken cases to the new Constitutional Court. Enshrined in the constitution is the sanctity of the individual's human rights and everyone has the right to take their case to the highest court in the land. Although they set out to record specific stories of those that had benefited from this, the project soon developed into a broader look at individuals' lives. For Adam Broomberg and Oliver Chanarin, who have worked together for a number of years, the photograph is just the end product of an exchange between them and the sitters. They use a large format camera, so it takes time to set up the portrait, allowing the sitters to talk about their lives, aspirations and fears. Their comments, which appear as text next to the images in the exhibition (click on images to view), become an integral part of the work. We hear from the younger generation in South Africa, who have little memory of life 10 years before, such as Matapa Mayla, a contestant in Miss Teen South Africa, who wants to be materially successful and work for BMW. Mishack Masilela, a Miss Gay Soweto contestant, wished to be open about his sexuality and to marry the man he loves. Tessa Davis, a female boxer at Eldorado Park, reveals the tragic effects of being raped at a young age and how it has alienated her from her family.

For the young dentistry student Mandlenkosi Noqhayi it is important to continue old rituals by being a circumcision initiate, despite a lack of understanding from many of his urban peers.
Threaded through these portraits and glimpses of everyday life we gain an understanding of the wider issues facing South Africa today. The need for housing and jobs and the problems of widespread violent crime, the impact of economic migration from neighbouring African countries and, perhaps most significant of all, the widespread effect of the Aids epidemic. Brought together the work explores the complex nature of life in South Africa at such a critical and important time in the country's history.

"From the first visit I made to the Maze Prison I knew what it was I wanted to convey: scale and repetition. I wanted to create long sequences of pictures that would replicate my experience of walking through what felt like endless spaces that only fractionally changed, that in the end left you feeling completely disoriented. It took time to understand the prison's different phases and stages and sections and divisions; there is nothing more conceptual than a prison. I was keen to retain the idea of the prison not as a relic, as if the conflict was something of the past, over and resolved, but instead to give the idea of the place being ready for use. This was so as to mirror Northern Ireland's current state of political limbo, and uncertain future."
Donovan Wylie, 2004.

This exhibition is an exploration of The Maze, a prison 10 miles outside of Belfast that has played a unique role in the Northern Ireland troubles. Built alongside the Long Kesh Internment Centre, it was conceived as a maximum-security prison for political prisoners responding to escalating violence. Architecturally the prison blocks were arranged with four-cell wings off a central administration block. Eight of these H-blocks were housed within a 17-foot tall perimeter wall stretching two and a half miles. The architecture of HMP Maze was designed to create both a physical and psychological structure to both confine and contain; while functional, it is disorientating in its repetitive structure.

The prison became a site of refusal to conform by its prisoner inhabitants, becoming a microcosm of the struggles between Republican and Loyalist prisoners. Self-contained communities developed in each compound, as the prisoners separated into groups defined by their political beliefs, ordering their lives on military structures outside of the prison. Many of the detainees actively objected to their imprisonment, with blanket and dirty protests, the killing of prisoners and prison staff, hunger strikes and escapes characterising the prison and its representation. As a symbol of 'the troubles,' The Maze holds a unique position within recent history.

Following the Good Friday Agree-ment of April 10 1998 the prison was emptied of its paramilitary prisoners as the groups they represented agreed to the cease-fire.

In the two years following the agreement, 428 prisoners were released, with 300 prison officers moved to other posts. On September 29, 2000, the final four prisoners at Maze were transferred to other establishments in Northern Ireland and the Maze prison was closed. The site has now been given to the Northern Ireland Office; its future use is yet to be decided.

The architecture however remains; empty save for a handful of prison officers who patrol this uninhabited site that, at its peak during the 1980s, housed more than 1,700 prisoners. Between November 2002 and October 2003 Magnum photographer Donovan Wylie was given unprecedented access to photograph the prison extensively, making 14 visits to The Maze. These photographs not only document a moment in history, they convey the psychological and physical structure of prison architecture. It has become an institution in waiting, with no resolution on its future.