Into My World: Recent British Sculpture, an exhibition of the work of nine emerging and mid-career British artists. Twenty-six artists were specially commissioned to create new works on paper to appear in the pages of eight regional newspapers while the Museum was closed for renovation. With construction completed, Aldrich curators bring these original works together alongside their newsprint reproductions in the exhibition The Drawn Page. a preview of the Museum's re-opening exhibitions in the new space will add to the festivities of Make It New! The celebrations begin with the gala on Saturday evening. 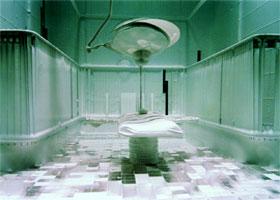 The evening will feature cuisine by Alice Waters, owner and founder of Chez Panisse in Berkeley, CA. and dubbed 'Mother of American Cooking' by The New York Times. Connecticut State Representative John Frey and internationally renowned artist Peter Halley will be honored as this year's recipients of The Annual Larry Award, given to distinguished individuals for their service to and impact on the arts.

Live entertainment by Kid Koala and a preview of the Museum's re-opening exhibitions in the new space will add to the festivities of Make It New! The celebrations begin with the gala on Saturday evening, June 12 at 7 p.m., followed by the member's opening and dedication on Sunday, June 13 from 12 noon to 3 pm. The Museum's official grand opening to the public is on Sunday afternoon from 3 to 6 pm.

From June 13 through September 1, 2004, The Aldrich Contemporary Art Museum will present Into My World: Recent British Sculpture, an exhibition of the work of nine emerging and mid-career British artists. Curated by independent London-based curator Stephen Hepworth and Aldrich associate curator Jessica Hough, Into My World, is one of several exhibitions and installations to inaugurate the reopening of The Aldrich after a yearlong renovation and expansion project that doubled the Museum's existing size. An opening reception will be held at the Museum from 3 to 6 pm on June 13, 2004.

All works included in the exhibition date from the last five years, and many will be on public view for the first time. Participating artists are Laura Ford, Matt Franks, Roger Hiorns, James Ireland, Jim Lambie, Mike Nelson, Mariele Neudecker, David Thorpe, and Saskia Olde Wolbers. For several of these artists, Into My World will mark their American museum debut. A full-color catalogue is available in conjunction with the exhibition, and includes short texts on each of the artists written by Stephen Hepworth and an essay by Jessica Hough. This exhibition is supported by the British Council.

The works in the exhibition display a refreshing sincerity, marking a departure from the coolness and cheeky attitude that have characterized the British art scene for the past decade. These emerging British artists entice the viewer into a world that transcends their reality, engaging themes that are spiritual and fantastical rather than raw or shocking. Whether futuristic, mythological, or purely fanciful, the works in the exhibition stroke a strong counterpart to the British art scene's notorious Young British Artists (YBAs) made famous in the Brooklyn Museum of Art's 1999 Sensation exhibition.

ABOUT THE ARTISTS
Laura Ford's theatrical sculptures depict small boys with donkey-like heads, weighed down by their own strange soft anatomy. Reminiscent of the lost boys of Pinocchio, these figures lead us into both a mythological and a strangely psychological space. Ford had a solo exhibition at Centro de Arte de Salamanca (2002) and exhibited with Jacqui Poncelet at Camden Arts Centre, London (1998).

Matt Franks builds precarious sculptures carved from pastel-hued Styrofoam, and assemblages of neon-colored Perspex. In each a strange narrative emerges, and humor is at the fore as he juggles comic book references with Bernini in a constantly evolving playground of shape and form. Franks's has shown in Art Now Space, Tate Britain, and was included in the British Council touring exhibition Tailsliding (2001).

Roger Hiorns's dense and twisting columns of soap bubbles ooze from suspended ceramic pots in one of his works, while a growth of blue copper sulfate crystals threatens to engulf a pair of model cathedrals in another. These curious and fragile juxtapositions of materials provide glimpses of the artist's spiritual world. Hiorns was included in Shimmering Substance (2002) at Arnolfini, Bristol; Cornerhouse, Manchester; and in the British Council touring exhibition Still Life.

James Ireland sets out to draw the viewer into a search for the perfect world hiding in the ordinary mixture of household furniture, light bulbs, plants, boxes, and images torn from magazines he haphazardly assembles. Forcing the viewer to crouch or kneel by creating a single vantage point, Ireland engages the viewer, allowing them to search for the picturesque among the mundane. Ireland was included in A Square of Ground (2000) at the Jerwood Gallery, London, and Viewfinder (2002) at Arnolfini, Bristol.

Jim Lambie is interested in redefining territories and spaces utilizing everyday materials to make sculptures and installations that have a dream-like quality. Often appearing makeshift in form and sometimes inspired by pop music, they create new and changed psychological spaces in which the viewer becomes immersed. Lambie was included in Days Like These (2003) at Tate Britain and Early One Morning (2002) at the Whitechapel Gallery. His solo exhibitions include Kebabylon, Inverleith House, Edinburgh, and Modern Art, Oxford (2003). He will represent Scotland at the Venice Biennale (2003).

Mariele Neudecker's fluid-filled vitrines contain three-dimensional renderings of landscapes that quote the Northern European Romantic tradition. With the addition of chemicals, they give the impression of being shrouded with early morning mist. Neudecker was included in the Melbourne International Biennial (1999) and the Yokohama Triennale (2001). Her solo exhibitions include the Ikon Gallery, Birmingham (2000).

Mike Nelson's works consist of labyrinths of small, but politically and symbolically loaded corridors. Each space leads on to the next through salvaged doors that slam closed behind the visitor. Sparsely furnished with found items from other peoples' lives, they articulate the patina of memory and meaning that is encrusted like dirty fingerprints on used furniture. Nelson was included in the Biennale of Sydney (2002) and the Istanbul Biennale (2003). His solo project, The Deliverance and the Patience, was included in the Venice Biennale 2001 and he was short-listed for the Turner Prize in 2001.

David Thorpe's work is inspired by his interest in utopian communities and fantastical architecture. His collages capture the exteriors of his imagined homes, while his sculptures give form to what they might contain. Made with passion and conviction, the work remains the product of the suburban daydream. Thorpe was included in Drawing Now: Eight Propositions (2002) at MoMA, New York, and Twisted â€”Urban and Visionary Landscapes in Contemporary Painting (2001) at Van Abbemuseum, Eindhoven.

The Aldrich Contemporary Art Museum announces the exhibition of a unique publication project. Twenty-six artists were specially commissioned to create new works on paper to appear in the pages of eight regional newspapers while the Museum was closed for renovation. With construction completed, Aldrich curators bring these original works together alongside their newsprint reproductions in the exhibition The Drawn Page, on view in the Museum's Leir Gallery from June 13 through September 1, 2004, with an opening reception on June 13, 2004 from 3 to 6 pm at the Museum.

Conceived to continue The Aldrich's exhibition program while the Museum was closed to the public, The Drawn Page originally appeared from October 2, 2003, to March 18, 2004, in the pages of the Arts & Leisure section of the eight Hersam Acorn newspapers. Each week for twenty-five weeks, a new work on paper appeared on a full page of each publication, reaching over 40,000 homes in CT and NY. The participating newspapers were The Ridgefield Press, The New Canaan Advertiser, The Wilton Bulletin, The Darien Times, The Redding Pilot, The Weston Forum, and The Lewisboro Ledger.

Today, visual art is often confined to specialty publications geared toward those already engaged with the art world. The Drawn Page experiments with collaborations between Museum, industry, artists, and community by presenting art in a forum usually reserved for local news and advertising. When the modern newspaper was born in the early nineteenth century, prior to the rise of photolithography, printed images were hand-rendered. Early American artists, including Thomas Nast and Winslow Homer, provided drawings that were independent works of art not necessarily related to news stories. Today, drawings in newspapers are relegated to either the Op Ed page or the Comics section. The Drawn Page provides a new opportunity to connect artists with the public, stimulating an awareness of contemporary drawing and its possibilities.