Janet Cardiff: Forty-Part Motet differs from Cardiff's audio-walks, in which found material is montaged with recorded sound effects and the artist's narrative voice. Laura Kikauka, Exactly the Same, but Completely Different: Laura Kikauka is a Berlin and Meaford, Ontario-based artist whose gesamtkunstwerk pop-art installations present a unique approach to mixed-media sculpture. John Kormeling: The exhibition and catalogue reveal how Kormeling's projects retain a critical but unconventional approach to architectural standards and design-build projects, often prioritizing the automobile and the urban infrastructure. 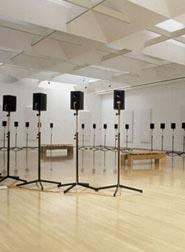 Winner of the Millennium Prize 2001, Forty-Part Motet is a reworking of "Spem in Alium" by Thomas Tallis, a 16th-century English composer, who is said to have produced one of the most complex pieces of polyphonic choral music ever composed. Some people believe that Tallis originally composed this forty-part motet in a very spatial way; it was designed to be sung in a chapel with eight alcoves for eight different choirs, so that the voices would move around the audience in the central core.

Forty-Part Motet was recorded by the Salisbury Cathedral Choir and was originally commissioned by the Salisbury Festival. Forty separately recorded choir voices are played back through forty speakers positioned around the room. The effect of the work on visitors is deeply moving, earning it a popularity rarely encountered in contemporary art.

Forty-Part Motet differs from Cardiff's audio-walks, in which found material is montaged with recorded sound effects and the artist's narrative voice. However, as with the audio-walks, Cardiff's true medium in this work is sound. While the visual background of Forty-Part Motet is not unimportant, Cardiff's emphasis on the three-dimensional or sculptural qualities of sound is what distinguishes her work as a visual artist.

"Most people experience Tallis' piece of music now in their living rooms in front of only two speakers," says Janet Cardiff. "Even in a live concert the audience is separated from the individual voices. Only the performers are able to hear the person standing next to them singing a different harmony. I wanted to be able to climb inside the music.â€

Janet Cardiff is one of the rising stars of the art world today, one of the few Canadian artists to enjoy an international career. She represented Canada along with George Bures Miller at the 2001 Venice Biennale. Her work was included in the opening exhibition of the Tate Modern in London and has been featured in solo exhibitions across Canada and abroad.

The Power Plant would like to extend its appreciation to the National Gallery of Canada, director, Pierre ThÃ©berge, and his staff for facilitating the loan of Forty-Part Motet.

Laura Kikauka is a Berlin and Meaford, Ontario-based artist whose gesamtkunstwerk pop-art installations present a unique approach to mixed-media sculpture. For the last twenty years, Kikauka has manifested a keen interest in material culture by bringing together vast mounds of outdated electronic gadgetry, industrially produced anonymous crafts, and quality junk sorted by colour or some other common characteristic. Her installations have taken shape in a variety of settings, often far removed from the world of fine art museums. However, it is the museum, the great archive of collections of objects that ultimately offers a challenging platform for her sculpture, and it is in gallery or museum spaces that Kikauka's densely structured site-specific works have had the greatest impact over the years.

Memorable, expansive installations have taken shape at cultural institutions such as the Western Front in Vancouver (1999) and the MAK in Vienna (2002). For each installation Kikauka establishes a highly specific visual (and often audio) language that plays off and blends the increasingly overlapping worlds of high and low art forms. All of Kikauka's installations share a highly personalized quality in the fetishistic covering of various surfaces (from studio walls to found objects) with plastic toys, packaged or processed food, commercial signage, mass-media images and so forth. Her process-oriented sculptures offer an arresting blend of slapstick humour, kitsch sentiments, party games and obscure popular music, all vying for attention in a non-hierarchical assemblage of objects that veers from extreme orderliness to a degree of chaos. Kikauka has transformed the clerestory and south entrance of The Power Plant using a wide range of found and recycled materials.

Although his work is largely unknown outside Europe and Japan, John KÃ¶rmeling is one of the most inspiring contemporary Dutch artist-architects. His interdisciplinary strategies investigate how many people negotiate the complexities of public/private life to ultimately expand the range of creative solutions through art, architecture, design and city planning.

John KÃ¶rmeling was born in Amsterdam and graduated from Eindhoven Polytechnic in architecture and urban planning in 1980. Early in his career he became dissatisfied with small-minded systems and the constrictive practices of traditional and much of modern architecture, urban planning and art. His primary focus has been to circumvent systemic limitations and he has struggled to liberate space by creating solutions with a sudden and resonant impact.

Since 1981, KÃ¶rmeling has designed and/or built an amazing array of objects and ingenious installations with an emphasis on light and lightweight solutions. One of his first recorded projects at De Appel, in 1983, focused on liberating space with light, when he presented an interactive installation, Ontwerpmachine (Designing Machine). By exposing phosphorescent filaments and small Styrofoam balls to three-minute doses of artificial light, he demonstrated how the largely ephemeral materials would reveal, in the alternating periods of darkness, the existing space within a new space of phosphorous green. Another project, at the Apollohuis in Eindhoven, was the sculpture Hangen en staan (Hanging and Standing). For this project, KÃ¶rmeling shot a beam of light through the building, from the basement to the attic, using a series of holes in the foundation and carefully positioned mirrors to reflect the laser's beam. His large-scale neon birthday signs on buildings (Kop van Zuid - Rotterdam, 1989), his electric light shining through miniature-scale faux storm clouds onto a sunbather (Gat in de Wolkâ€”Hole in the Cloud, Madurodam, Den Haag, 1989), or his long awaited Theehuis (Tea Shop,) in Valkenberg Park, central Breda, 2002â€”these and other projects showcase again and again the way he breaks design open , creates space and remarkable flashes of beauty by a process of subtraction and the use of light to engage the viewer. Furthermore, the exhibition catalogue plays a vital archival role by providing a a wide-ranging overview of his career. KÃ¶rmeling's creative strategies make the politics of urban growth and space conservation more malleable and enlarge the possibilities for cutting-edge solutions.

The exhibition and catalogue reveal how KÃ¶rmeling's projects retain a critical but unconventional approach to architectural standards and design-build projects, often prioritizing the automobile and the urban infrastructure. Numerous projects, including Simultaan Ontwerp Wedstrijd voor Stedebouwkundigen (Simultaneous Design Match for Urban Developers), Eindhoven, 1992, or Old-Fashioned New Housing Development as a Sculpture, Kattenbroek Amersfoort, 1992, Molensloot, Den Haag, and Clever Roads, both 1994, present a confluence of design solutions guided by an uncompromising directness. In each case KÃ¶rmeling contemplates and elevates the much-maligned automobile. Square Car (1994), Flat Car (1995), Mobile Fun (1999), Coach Car (2003), the Fastest Guided Tour of the Netherlands (1992) and other works reflect on its ubiquity. The presentation of KÃ¶rmeling's concepts at The Power Plant is certain to elicit audience anxiety and at the same time kindle the desire for freedom of movement.

Whether KÃ¶rmeling creates with light, unique physical solutions, political text in newspapers or challenging approaches to city planning, he invariably infuses each project with an unnerving strain of humour. He pushes the absurd to expand the range of possibilities for architecture and design solutions, making the impossible not only possible but desirable. HI HI HA HA (1993, Schiphol Airport), NIEUW! (1992), Mobile Fun (1999) and many other projects employ absurd displacements of objects, ideas and people to strategically introduce practical solutions for environmental issues. The Power Plant exhibition intends to highlight and further explore KÃ¶rmeling's biting, critical wit.

On the occasion of the exhibition, The Power Plant, Plug In Editions, Winnipeg, and the Van Abbemuseum, Eindhoven, have co-published A Good Book, a 180-page colour and black & white catalogue with 460 images documenting KÃ¶rmeling's significant output over the last twenty-four years, including his most recent international projects.

The John KÃ¶rmeling exhibition is generously supported by the Mondriaan Foundation, Amsterdam. John KÃ¶rmeling's Mobile Fun is presented in partnership with the Toronto zooarts Festival and with the support of the Ontario Cultural Attractions Fund. Additional support for the exhibition is provided by the Royal Netherlands Embassy, Ottawa, and the Royal Netherlands Consulate, Toronto; KLM; Mr. Steven Latner; and Mr. Richard Sawyer.