With works from its collection, the Bayerische Staatsgemaldesammlungen (Bavarian State Painting Collection) will open a further branch gallery in the Residence Palace in Neuburg a.d. Donau in spring 2005. The approximately 120 paintings will be devoted exclusively to Flemish Baroque painting. Before the paintings leave Munich permanently, the most important works will be on public exhibit one last time in Munich. 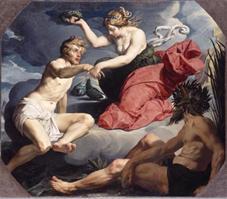 With works from its collection, the Bayerische StaatsgemÃ¤ldesammlungen (Bavarian State Painting Collection) will open a further branch gallery in the Residence Palace in Neuburg a.d. Donau in spring 2005. The approximately 120 paintings will be devoted exclusively to Flemish Baroque painting. Before the paintings leave Munich permanently, the most important works will be on public exhibit one last time in Munich.

The Bayerische StaatsgemÃ¤ldesammlungen contains the largest collection in the world from this school of painting. 170 of these masterpieces are on exhibit in the Alte Pinakothek, with the world-famous Rubens collection at the heart of the works group.

These extraordinary riches are primarily due to the efforts of two passionate Wittelsbach collectors from the end of the 17th / beginning of the 18th century: Max Emmanuel, Prince Elector of Bavaria in Munich and Johann Wilhelm, Prince Elector of the Palatinate-Neuburg in DÃ¼sseldorf, whose grandfather, Wolfgang Wilhelm of the Palatinate-Neuburg had already commissioned altar paintings for the court chapel in Neuburg directly from Rubens: "The Great Last Judgement" for the main altar, as well as the works "Adoration of the Shepherds" and the "The Descending of the Holy Spirit" for the side altars. While "The Great Last Judgement" has always belonged to the displayed permanent collection of the Alte Pinakothek, both side altar paintings have remained practically hidden from the general public since the Second World War â€“ as have numerous works from other Flemish masters.

Consequently, plans were made long ago to exhibit these two important Rubens works at their original location and make them freely accessible.

These paintings, which were brought to Neuburg in 1620 and about which information exists concerning their execution and remuneration through extensive correspondence between Rubens and Wolfgang Wilhem, will have a central place in the Neuburg Gallery. Aside from these works, six additional paintings from Rubens and his studio are part of the works intended for Neuburg.

Beside Rubens, the two other outstanding Antwerp painters of the time were Anthony van Dyck and Jacob Jordaens; both worked in their early years in Rubens' studio, subsequently developing their own unmistakable style that is apparent in their history paintings and portraits.

In Antwerp, all fields of painting were cultivated: history, portrait, landscape, still life, hunting scenes, and genre works. Each will be shown in important examples from the best representatives of their respective field, including Hendrik van Balen, Jan Cossiers, Frans Francken the Younger, Frans Snyders, David Teniers, Paul de Vos and Jan Wildens.

The ever-popular Jan Brueghel the Elder, son of the "peasant painter Brueghel," will be represented in the selection of works by his small but precious copper panels with a series of first-rate landscapes as well as splendid season allegories from 1616.

A contrast to the works that were primarily executed in Antwerp and under Rubensâ€™ influence, constitute a group of French-influenced paintings from the LÃ¼ttich school of which the Bayerische StaatsgemÃ¤ldesammlungen has the largest collection in the world. Outstanding large-scale works, mostly from the painter GÃ©rard Douffet, will be publicly displayed for the first time in several decades, including his major works "Pope Nicholas V at the Tomb of St. Francis of Assissi" from 1627 and "Empress Helena and the Raising of the Cross" from 1624.

Around one-third of the selection intended for Neuburg were part of, before the war, the Alte Pinakothek's permanent presentation; others belonged to various branch galleries. Most of the paintings have been especially restored and will be displayed, in their new splendour, in the Alte Pinakothek.

Background information
Art historian Uta Piereth and restorer Alexandra van Aaken will take a close look at and discuss Theo van Tuldens' "Joseph in a Garland of Flowers." The painting was recently restored for the branch gallery in Neuburg a.d. Donau.
07.10 | 02.30 p.m.