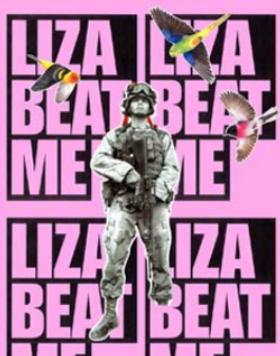 USA Today, an on-going project by HUG & MAGNAN, acts as the centerpiece of the show. The work is composed of ''caption heads'', which are images of public figures and publicized ordinary citizens summarized in a quick, abstract statements appropriated from the New York Post post-9/11. The individual heads are arranged as a ''power grid'' forming a larger portrait of contemporary civilization encircling the spectator who stands within the cylindrical tank.

A series of digitally reproduced collages appropriating headlines and graphics from the New York Post, Time magazine and various other sources become contemporary propaganda posters drawing inspiration from the constructivist simplicity of Aleksandr Rodchenko, the criticism and shock of Gilbert & George and the dark camp humor of John Waters. In the piece ''I'm not mad at you, I'm mad at the dirt.'' a candy cane clad Nancy Reagan recommends the viewer â€˜lighten up' because, as she naively concludes, ''it's not yor fault.'' Former soldier turned homegrown terrorist Timothy McVeigh appears in Home is Where the War is, a military inspired recruitment poster exclaiming ''SIGN ME UP!'' Greedy oil tycoons, the chilly cessation of the Cold War, and Extreme Capitalism's quest for global domination are among the other topics explored.

Also included are two series of independent drawings that are continuations of solo work by both Hug and Magnan. Hug cites the ongoing battle of east vs. west assuming the stance of war as fashion in new versions of his techno portraits and landscapes. Magnan embellishes on his previous textile pattern propositions in the form of personal-pop camouflage portrait swatches.

Scott Hug has recently been included in the group show Majority Whip curated by Kathy Grayson and Laura Tepper at White Box and Today's Man at John Connelly Presents. He has also been featured solely and as HUG & MAGNAN in The Collectors Cabinet: For Marsha curated by Simon Watson at Marc Selwyn Fine Art (LA), and has collaborated with Magnan and Arnoud Holleman of RE- Magazine for Invitation #75 at Bureau/Stedelijk Museum in Amsterdam. Hug is also the founder of K48 Magazine and has previously curated Teenage Rebel: The Bedroom Show originally at John Connelly Presents and again at galerie du jour agnÃ©s b. in Paris, ATTACK: The Kult 48 Klubhouse at Deitch Projects-Brooklyn and DAAG ONS NIET UIT., a group show within a group show titled Magasin at Marres in Maastricht, Netherlands.

In addition to previous collaborative projects with and shows curated by Hug, Michael Magnan has recently been included in Majority Whip at White Box, Station North Arts & Entertainment District's Building Alteration Project curated by Gary Kachadourian (Baltimore), Today's Man at John Connelly Presents, and 100 Artists Make 100 T-shirts at Daniel Silverstein Gallery. Magnan is also the founder and sole member of the occasional textile surface design and fashion organization DO NOT PROVOKE US.