The Rich Visit the Poor The Poor Visit the Rich. The 115 collages - a technique Krystufek masters brilliantly - span a very witty frame of reference encompassing photographs, drawings, magazine cut-outs, and text. The artist provides a detailed bundle of visual chain reactions concerning the subjects power and society, poverty and wealth, art's impact and futility. The cultural meaning of advertising merges with manipulations of commercial private interests. Krystufek misses the discrepancies between the norms and standards of capitalism and those of minor and deviant groups with the emphasis of an artist familiar with the influence pictures exercise on their recipients 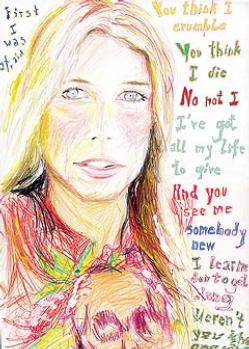 Life is full of injustices, and art is not fair either. Elke Krystufek registers this regrettable fact with peculiar calm. Unmoved, she goes about demonstrating how social contrasts and economic polarities put some life into our senses.

The impulse for the exhibition The Rich Visit the Poor, the Poor Visit the Rich - Part 2 came from the artist book of the same name which Krystufek produced for the BAWAG FOUNDATION EDITION. With this publication, the compulsive self-observer averted her gaze from her mirror image. Today's protagonists are the usual suspects featuring in her bio/biblio and being part of her ''my life is my artwork'' deal. Artists, gallery owners, collectors, curators - Krystufek falls back on the entire art scene yakuza, making them appear against a backdrop of slums and palaces, in chic salons and trashy saloons, in pink Cadillacs, designer chairs, and high-grade steel bathtubs, on garbage dumps, in supermarkets, and in front of graffiti walls.

The 115 collages - a technique Krystufek masters brilliantly - span a very witty frame of reference encompassing photographs, drawings, magazine cut-outs, and text. The artist provides a detailed bundle of visual chain reactions concerning the subjects power and society, poverty and wealth, art's impact and futility. The cultural meaning of advertising merges with manipulations of commercial private interests. Krystufek misses the discrepancies between the norms and standards of capitalism and those of minor and deviant groups with the emphasis of an artist familiar with the influence pictures exercise on their recipients.

A disciplined system underlies the images that, at first sight, seem to be jumbled together in an absolutely chaotic manner. Krystufek's order is an individual and selective order even if it supplies general standards for analysis. One of her hypotheses runs as follows:

The basic material of all (life) experience is art. Olafur Eliassons ''Weather Project'' in the Tate Modern, a poured painting by Hermann Nitsch, a foil work by Gerwald Rockenschaub, pictures by Maria Lassnig, photographs by Valie Export; performing artists in action: Katrina Daschner as a vampire, Uros Djuric in a football dress, Krystufek herself as a black knight in ''Two Blacks don't make a White'' 2001 in the Generali Foundation; Mark Dion among reeds, Andrea Fraser as a Brazilian carnival dancer, Vito Acconci in a Gerhard Merz exhibition, Elizabeth Peyton in a T-Shirt sporting the word ''run'' as one of innumerable allusions.

If the characters of the plot are concrete (the material used comes from Krystufek's unfathomable hoard of photographs), the context in which they appear is pure fabrication. Yet, it would not be Elke Krystufek if the ''similarities'' were accidental. The everyday magazine market provides her with her protagonists' environments which range from art journals, glossy design and architecture publications to the advertising pages of fashion journals and - a highlight of cynicism - Benetton's self-marketing sheet ''Colors,'' where the grossest visual shockers come from.

Meet architect Zaha Hadid standing in front of a brilliantly assembled shack she must be envious of, framed posh gallery owner ThaddÃ¤us Ropac sitting in a frame, collector Anton SchmÃ¶lzer standing with a reflex camera in a rubbish heap of a Barrackopolis slum, art dealer Lisa Spellman who has just blown up her car and is leaving the danger zone with nothing on her feet. The artist's insinuations are equally extreme, merciless, and witty: Maria Lassnig and Boris Grois love Silhouette glasses, Franz West and Edelbert KÃ¶b prefer a wet shave, Maureen Paley is a Cherokee, Georg Kargl swears by power naps in Joe Colombo's lounge chairs, Christoph Becker has snitched a Hodler picture and tries to hide it in an old clothes container, Candice Breitz uses Clinique lipsticks matching the blood-covered Satyricon lead singer's color.

Krystufek meticulously lists the sources of her material in the index of her book. This is also where the complexity of the book's text reveals itself to all eager basic research beavers: all collages are full to the brim with texts by the artist, with quotations, fragmented passages from art theory and philosophy, smart sayings and banal advertising slogans. The selection is precisely aimed at reinforcing Krystufek's arguments. Paul Virilio and SylvÃ¨re Lotringer pillory genetic selection as a new form of racism in ''Crepuscular Dawn,'' Jimmie Durham, whom Krystufek holds in high esteem as an artist and activist, asks himself why conformist art is always the most successful in ''A Certain Lack of Coherence,'' and Luce Irigaray states in ''The Way of Love'' that it is the difference between people that makes us sensitive to a new era of global intercommunication.

Krystufek uses the reference texts as content nodes which, in the dynamic tumult of the pictures, stand for the attitudes important to her on the one hand and hint at paradoxes annoying her on the other: the fictions created by the magazine market, the absurdity of advertising as a picture-generating medium anticipating the recipients' position, the ambivalent attitude towards ''political art'' which sees social Utopias destroyed by nobody else but the insiders of the art scene, art without fissures, irresponsible representation in an era in which the radical chic of a subversive outfit is always more important than any critical strategy.

The transformation of an exhibition into a book format is common practice. Elke Krystufek tries to go the opposite way for the BAWAG FOUNDATION. She couples the conventions of exhibitions with empirical analysis and interpretation and relates the presentation in space to collecting and archival procedures. Krystufek's strategy aims at revealing contexts, at making processes understandable that turn an unsorted accumulation of materials into a structured, definitely composed, and logical (printed) work: researching and documenting, classifying and deciding, filing and dismissing, searching and finding.

This is why the showcases contain the literature used, as well as magazines and newspapers as her basic materials. Krystufek picks up her scissors and cuts out what she needs for her collages in a comfortingly analogous manner, sticking one part on top of the other in an deliberate, linkage of high and low, claim and trash beyond any hierarchy. And the thing that presents itself as a rather cool coffee table book is actually the manifestation of an honest and effective activity that is to create knowledge, an attempt at depicting theory, an experiment evaluating the ideologies prevailing in the art world and their social substance.

First of all, 30 large photographic compositions based on the printer's copies for the book connect the book and the exhibition.

The video ''Same Time, Next Year'' serves as an additional link. The global hierarchy of power is confronted with private hierarchies of power. Elke Krystufek plays both parts of the two-person drama ''Same Time, Next Year'' by Bernard Slade, which was a big success on Broadway in the 1970s. The comedy describes the effects of an affair lasting for 26 years on the couple that meets in a hotel once a year. Both in the play and in Krystufek's reproduction, the time factor is of crucial importance. The protagonists go through various economic phases, from social advancements to collapses of their careers against the background of the hippie movement and the Vietnam War. In the video, the consecutive development is suspended by means of time and space scissors which resulted from the long production time at various locations.

Elke Krystufek has always dealt with classic sex and gender differences with nonchalant irony. The dimension of the body is a subject not entirely left out in this exhibition.

Friedrich Verzetnitsch, President of the Ã–GB, the Austrian Federation of Trade Unions, and Member of the National Assembly, and Prof. Dr. Robert Pfaller, Professor for Kulturwissenschaft at the UniversitÃ¤t fÃ¼r kÃ¼nstlerische und industrielle Gestaltung in Linz will make speeches on the occasion of the opening of the exhibition The Rich Visit the Poor, the Poor Visit the Rich - Part 2 in the BAWAG FOUNDATION at 6.00 p.m. on Tuesday, 29 June 2004. Elke Krystufek will be present.