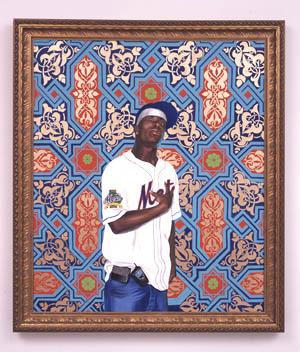 The Queens Museum of Art and the Bronx Museum of the Arts co-present SUBWAY SERIES Â®, a dual benchmark exhibition illuminating two of baseball's most storied franchises: the New York Mets and the New York Yankees. The project consists of two separate exhibitions, each conceptually linked to the museums' geographic proximity to the stadiums and directly linked through their shared subway stops with the respective teams.

Exhibition Catalogue
In conjunction with SUBWAY SERIES Â®, the Queens Museum of Art and The Bronx Museum of the Arts have partnered with zingmagazine on a 144-page, fully illustrated exhibition catalogue, also serving as the Summer 2004 edition of zing book. The limited edition publication will be available in late July at QMA Museum Shop (718.592.9700 ext. 238)

In celebration of the 40th Anniversary of the 1964 World's Fair, the Queens Museum of Art presents The Seeing Eye: Art and Industry at the 1964/65 New York World's Fair (July 18 â€“ October 24, 2004), a retrospective focused on the convergence of art and corporate sponsorship in Fair Pavilions. Kodak sponsored one of the most artistically important displays at the Fair - 121 exhibition prints by noted artists including Richard Avedon, Cornell Capa, Henri Cartier-Bresson, Elliott Erwitt, Yousuf Karsh, Dorothea Lange, and Irving Penn, originally shown as Photography as Fine Art: Museum Directors' Selections for the 1965 World's Fair. This exhibition, intended to elevate photography's recognition as fine art, is the core of The Seeing Eye. Models, films, documentary pieces and other works of art associated with the Kodak Pavilion, and the World's Fair as a whole, provide context and reveal the exciting interplay between art and industry that existed, uncovering a crucial element in photography's ascendancy to the realm of fine art.

The Seeing Eye is curated by BBQ Productions' Terri Marlowe and Curtis Cates.
________

Conceptual artist Terence Gower uses the museum's interior ramp to examine how the intensity of the color red affects the way in which people perceive and experience the surrounding architectural elements. Adding further commentary on the interplay between color and architecture is Gower's imagined conversation between artists Donald Judd, Theo Van Doesburg and Le Corbusier on the subject.

The Red Wall is made possible by The Greenwall Foundation, Cowles Charitable Trust, American Center Foundation, and The Lily Auchincloss Foundation.
________

In the ArtZone, Inspector Collector a.k.a. Harley Spiller, celebrates the passion for collecting. Close to a thousands objects from some twenty different collections will be exhibited in the museum's interactive art space. Funky pencils, including some believed to have belonged to George Washington; maps and Chinese menus from across the globe; unusual drinking straws, spoons, and scissors, are just the tip of the Cool Stuff iceberg. In the middle of the gallery will stand the CHOOSEUM, inviting visitors of all ages to create projects. Also, kids can win prizes from our gift shop when they venture a guess about the identity of mystery objects from the collections.

ArtZone, a hands-on artspace for children, is made possible by Emigrant Savings Bank.