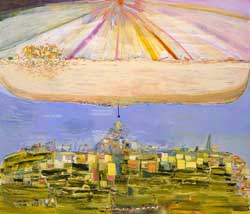 Trials and Turbulence: PepÃ³n Osorio, An Artist in Residence at DHS

This exhibition culminates PepÃ³n Osorio's three-year Artist-in-Residence at the Philadelphia Department of Human Services (DHS). A former social worker and 1999 MacArthur Fellow, Osorio (b. Santurce, Puerto Rico, 1955; lives Philadelphia) conceived of this volunteer project as a series of interventions aimed at opening up the traditionally closed system. Working closely with DHS social workers, administrators, and clients, Osorio focused on the foster care system to conduct an institutional critique at one of the most vulnerable intersections between private life and public policy.

The show transforms the first floor galleries at ICA into a total DHS living- and working-environment. It is composed of a group of environmental tableaux based on what the artist refers to as social architecture. Face to Face (2002) represents the open plan offices at DHS with each cubicle, from its coffee cups and personal mementos, portraying people who work there. Standing in for the caseworkers clients, is a towering cage of an actual family s possessions, borrowed from DHS storage. A second installation Trials and Turbulence (2004) recreates a Family Courtroom, where a young adult confronts the judge who sentenced her to the foster care system. Charged with realism, Osorio's imagery of a government system at work, along with the potential for reconciliation and awareness, are enhanced by the art gallery as a context for abstraction and contemplation. This exhibition is organized by ICA's Senior Curator, Ingrid Schaffner, and Curator of Education, Johanna Plummer.

This is the first exhibition to survey the work of the legendary architecture and art collective, Ant Farm. A group of radical architects who were also video, performance and installation artists â€“ but above all, visionaries and cultural commentators â€“ Ant Farm was founded by Chip Lord and Doug Michaels in 1968 amidst the hot-house of San Francisco's counter-culture. Influenced by "alternative" architects like Buckminster Fuller, Archigram, and Superstudio, Ant Farm's early inflatable structures were suited to a nomadic, communal lifestyle, divergent from the mainstream Brutalist architecture of the 1960s. The group was also known for spectacular performance events like "Media Burn" (1975), for which Lord and Michaels dressed up like astronauts and sped a customized Cadillac El Dorado through a pyramid of burning televisions. Organized by the Berkeley Art Museum, this exhibition is centered around a visual "timeline" of the group, which includes ephemera, blueprints, publications, documents, drawings, collages, photographs, architectural models, and documentary video clips. ICA is the only East Coast venue for the exhibition.

This exhibition will reconstruct one of the Argentinean artist, David Lamelas' film and media installations from the 1960s. Lamelas was a pioneer of the radical repositioning of sculpture in the 1960s and 70s, which abandoned the traditional definitions of the medium, displacing its materials and modes of production. His projection works sought to analyze art as a means of communicating pure information â€“ to question the role of the film and television industry. Within the current discussion on the relationship between art, the media, and politics, his work re-presented thirty years later has lost none of its relevance. This exhibition is organized by ICA s 2003-2004 Whitney-Lauder Curatorial Fellow Tanya Leighton.

For its ongoing series of Ramp Projects, ICA has invited Amy Sillman (b. 1956, Chicago, Illinois; lives New York, New York) to do a large wall-work. Sillman paints according to an idiosyncratic method of post-Surrealist, latter day Chicago Funk School, stream-of-consciousness. At once figurative, decorative, narrative and abstract, her paintings channel a voracious and noodling intelligence about "anything intimate," including Italian fresco painting, Indian miniature painting, the films of Douglas Sirk, the surfaces of Abstract Expressionist painting, poetry, and television. Sillman's work has been widely exhibited since the early 1980s in group shows around the world. She is a founder of the artist-run gallery Four Walls, in Brooklyn, New York; Milton Avery Professor in the Arts at Bard College; and a 2001-2002 recipient of a Guggenheim Foundation fellowship.