The first in a number of group exhibitions that seek to stimulate the London art scene through contrasting encounters between Italian contemporaries, many of whom have previously exhibited together. 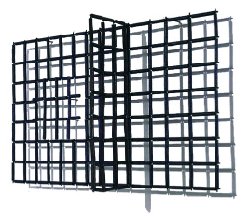 Many of the works on show, such as the paintings Cane Fantasma by Roberto Rizzo and Untitled by Maria Morganti, exemplify linguistic and formal analogies through their research into colour and form. However, it is only on closer inspection that their differences in technique and in their poetic layering of veiled memories and meanings become apparent. Complementing their works is Walter Cascioâ€™s large monochrome composition of charcoal on paper. Senza Titolo is an exploration of superimposed shapes and forms that emphasises the power of the empty space it occupies.

Shared interests can also be detected in divergent works by Roberto Caracciolo and Enzo Castagno, shown alongside each other on the ground floor of the gallery. The former, SHIFT, is a painting of continuous yet broken lines and segments of different colour. Castagnoâ€™s Bisanzio is a construction of a vast number of pierced ceramic cylinders forming a three-dimensional grid structure of opening and closing planes suspended from the wall. Both play with the opposing energies that derive from the seeming stability of a grid, yet suggest a state of unrestrained freedom. Castagnoâ€™s work is also full of symbolic quotations, a predominant theme in the sculptures by Giacinto Cerone, though they could not be more different. Whereas Castagno draws on symbolic references of ancient mythology to bridge the past and contemporaneity, Cerone explores both a fictional and immediate reality that manifests itself through a sentimental yet uncompromising violation of the material.

Such poetic reminders of human existence resonate particularly in the works by Sergio Ragalzi, albeit in a different form. Ragalzi is presented in this exhibition with two works, a painting shown in juxtaposition with a large-scale work by Salvatore Garau and with one of his bright orange-red large Klone standing like a guardian on the balcony of the gallery. This work of expanded polystyrene and industrial paint is representative of Ragalziâ€™s vision of our crude human existence between life and death, between being an embryo or a corpse, once interpreted by Roberto Lambarelli as a â€˜memento mori, a reminder to man and, possibly, to the whole of humanity of his genetic limits: both material and spiritualâ€™. The limits of mankind are also explored in the work of Garau. Ghiacciaio su Roccia Rossa is a graffitiesc work executed in acrylics on vinyl skin. It is the absence of the human figure and his concentration on one of the four elements, Water, which highlights the omnipotence of the universe despite mankindâ€™s potential to play havoc with earthâ€™s equilibrium.

In the search for the meaning of existence these artistsâ€™ contrasting explorations complement each other in an infinite dialogue that Compendium aims to explore. As well as introducing these artists to a new audience, this group show will serve as a preview for future solo exhibitions. The artists will feature in a simultaneous exhibition ASTRATTAMENTE at Annunciata Grossetti Arte Contemporanea, Milan.