The artist's contact with Tokyo will trigger a new series of artworks which will translate an analytical and creative approach to this new dimension through video and photographic elaboration. In Tokyo the concept of space is extremely contradictory in an exponential manner in relation to the scheme of Western cities. 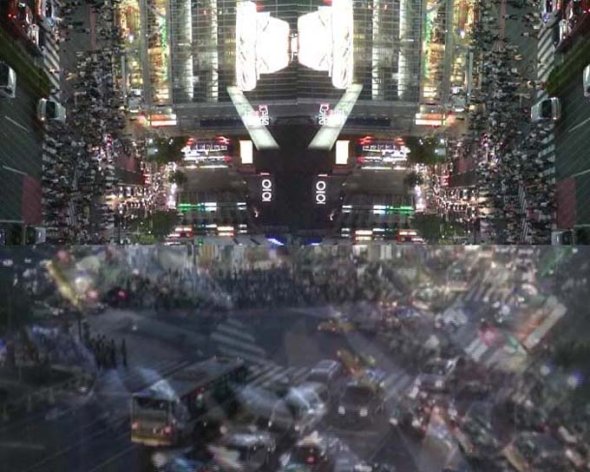 Stefano Cagol's contact with Tokyo will trigger a new series of artworks which will translate an analytical and creative approach to this new dimension through video and photographic elaboration.
In Tokyo the concept of space is extremely contradictory in an exponential manner in relation to the scheme of Western cities.

In a MEGALOPOLIS, the space for a single person becomes under all aspects - vital perimeter, time for one's self, satisfaction of the individual - reduced to the essence. However it is right here that he is interested in facing an analysis of actual space by putting it into discussion, and by planning to give form to a space on his own, a personal dimension of analysis able to create and to take forcefully place in this enormous ant's nest.
Tokyospace is thus Cagol's creative space in this Western downtown. His space is inserted into a pre-existing environment and at the same time detached in an analytical way in order to create a metaphysical reflection which goes beyond mere documentation. A scientific, chemical, and physical laboratory, a highly valuable technological software... a slide, a chip, an electronic microscope.
A fundamental characteristic of tokyospace is the one of movement, of a physical and mental journey. Attention is focalized on close visions of reality, met and immortalized through video and photography in a precise moment, aiming to amplify or put into discussion our actual reality. The place in which Cagol moves is therefore for me the landscape, meant as a natural/urban dimension. Environment, outside space, is an ideal territory, open to a continuous re-definition and to endless contaminations. A structured space, architecture, becomes a witness in constant transformation of my displacements; as much as the detached, evolved, cyber, human presence moves as if inside an aseptic area with a microbiologically controlled atmosphere.
The close vision will thus be turned to various declinations of this specific metropolitan space, and in the meantime space of infinity, between the single individual and the conglomerate.

This visual work in progress will then be shown in collaboration with Johnnie Walker of the Tokyo AsArt Foundation and with the Civic Gallery of Contemporary Art Trento on September 18, 2004 from 7 pm till late.
The web project http://www.tokyospace.com characterized by both the speed and the unlimitedness of current media, amplifies the idea of absence of a close spatiality.

Tokyospace by Stefano Cagol stages mutual exchange between individual and shared space within a glocal dimension par excellence: the megalopolis of Tokyo. At a conceptual level the whole project brings back to the principle of Leibnitz' monads, i.e. a closed organism representing a point of view on the universe and which, in virtue of this point of view, inevitably bounces again onto the outside. The monad, or better the artist's creative space, stands for intimacy, subjective dimension, but it becomes also permeability, constant reflex of a surrounding space.
In his recent artistic production, Stefano Cagol has become increasingly interested in the perception of space, both fictitious and concrete. His research is brought forth with video and photography which are mainly used because of their anti-documental qualities, their investigative and
evocative character. Approached visions as well as amplifications of the surrounding context become metaphor of the various modalities of space reception in the complex relationship world-I. At the same time, Stefano Cagol's work in progress is part of the long tradition which uses
photography as a filing process; the Tokyospace images become a sort of archive of our everyday life in which meaningless details set up elements of a bigger interest of wide sights. His video shots and pictures are thus the expression of a peculiar and highly subjective moment that invites us to think again about the whole system of a megalopolis in terms of human fruition, therefore never the same and endlessly undergoing visual and emotional mutations.