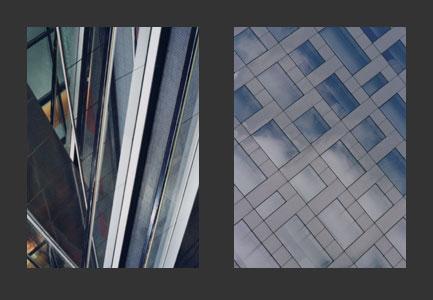 Emergences The theme of the exhibition is Emergences. 'Emergence' is a word largely used in complex systems theory to describe the phenomenon of the appearance of a large-scale structure whose characteristics are totally different from those of its smaller constituent parts.
The idea of the shaping of structures is characteristic of Lucchi Basili's work, which always departs from photographic investigations of (most often) high-tech architectures to produce stunning images that involve no manipulations whatsoever but are a faithful rendition of what any beholder's eye could have seen in that moment in the same conditions. At the heart of Lucchi Basili's work is the idea that our common perception of the 'real' is based on stipulations that prevent us from really looking at what is out there. Her photographic work is an attempt to bypass such stipulations by showing facets of reality that most of us would fail to recognize as such. The focus is on architectural structures, in that architecture is the language through which every culture expresses some of the innermost dimensions of its own symbolic world, and therefore of its identity. Seen though Lucchi Basili's lens, the architectural shapes reveal an unexpected, somewhat mysterious content.
In Lucchi Basili's work, images are sometimes associated in complex polyptichs, and also when they are not, they most often dialogue because of their common aspiration to reveal fields of forces, of tensions that shape the space in which they are embedded. Within each single image, the field of force 'emerges' unexpectedly from the manifold constituents of architectonic shape, in a way that seems entirely intentional but in fact is not: none of such perceptual structures was purposefully designed by the architect. They are rather the trace of a deeper layer of reality of which we are basically unaware, that could be read by someone as the mark of a collective unconscious.
In the present solo exhibition, Lucchi Basili works on the dialogue among different architectures, attempting at the exploration of a yet larger scale of emergence, that involves different universes of shape from different architectures, which all belong to a same post-industrial social and economic environment.
At the same time, the exhibition will explore a different dimension of emergence, between image and sound: the structure of a sound work produced for this exhibition will interact with the visual structure of a site-specific installation. The relationship between modes of visual and sound perception conflates in an all-encompassing state of conscience pointing at the commonly removed layers of reality that are at the center of Lucchi Basili's research.
The exhibition will therefore offer the viewer a complex hierarchy of perceptual scales in which to pursue her or his quest for emerging structures. It is not an invitation to look at pictures, but a journey into the nature of contemplation and of its implications for our everyday attitude toward the reality of our built environments.

Lorenza Lucchi Basili's project for the Beth Allison Gallery solo show will be a site specific installation with photography and sound, involving three large dimension photographic series, all of them never exhibited before: Space Fortynine, Chicago, Space Fifty, Lille and Space Fiftyone, Lille. The latter series will interact with a sound work, Sound sequence nine, a world premiere as well.