Theories, Models, Methods, Approaches, Assumptions, Results and Findings. Hirstâ€™s works continue to infuse everyday objects with a sense of the sublime and the absurd. The exhibition includes 16 new sculptures and a new series of paintings. It features Hymn, a 20-foot tall painted bronze anatomical model. This transformation of a childhood educational toy into a monumental sculpture is emblematic of Hirstâ€™s playful nature. 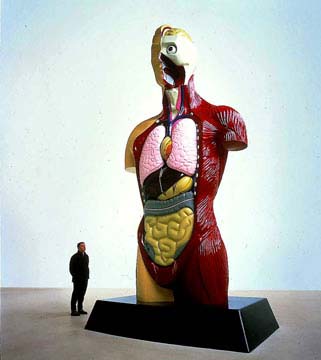 As one of the most recognized talents of the Young British Art movement, Hirst has risen to international prominence, startling the art world and the world at large with brilliantly conceived projects that are instantly identifiable as the work of a unique and provocative imagination. Often controversial, his most celebrated work has never shied away from the terrible beauty that lies in death and the inevitable decay contained in beauty.

Hirst's works continue to infuse everyday objects with a sense of the sublime and the absurd. The exhibition includes 16 new sculptures and a new series of paintings. It features Hymn, a 20-foot tall painted bronze anatomical model. This transformation of a childhood educational toy into a monumental sculpture is emblematic of Hirst's playful nature. A desire for order and a humanized science is embedded in a group of spectacular wunderkammers (glass cabinets of curiosities) that make visceral the themes of absence, longing, memory and loss. Also included in the exhibition are a number of works that further Hirst's meditations on the impermanence and fragility of life.

Damien Hirst was born in Bristol, England in 1965. While still a student at Goldsmith's College in 1988, he curated the now renowned student exhibition, Freeze, held in east London. In this exhibition, Hirst brought together a group of young artists who would come to define cutting-edge contemporary art in the 1990's. In 1991, he had his first solo exhibition at the Woodstock Street Gallery, entitled In and Out of Love, in which he filled the gallery with hundreds of live tropical butterflies, some of which were hatched from the monochrome canvases that hung the walls. In 1992, he was part of the ground breaking Young British Artists exhibition at the Saatchi Gallery.

In this show, he exhibited his now famous Physical Impossibility of Death in the Mind of Someone Living, a tiger shark in a glass tank of formaldehyde. That same year he was nominated for the prestigious Tate Gallery Turner Prize, and later won that coveted award in 1995.

Hirst' s best known works are his paintings, medicine cabinet sculptures, and glass tank installations. For the most part, his paintings have taken on two styles. One is an arrangement of color spots with titles that refer to pharmaceutical chemicals, known as Spot paintings. The second, his Spin paintings, are created by centrifugal force, when Hirst places his canvases on a spinner, and pours the paint as they spin. In the medicine cabinet pieces Hirst redefines sculpture with his arrangements of various drugs, surgical tools, and medical supplies.. His tank pieces, which contain dead animals, that are preserved in formaldehyde, are another kind of sculpture and directly address the inevitable mortality of all living beings. All of Hirst's works contain his ironic wit, and question art's role in contemporary culture.

A fully illustrated catalogue with essays by Gordon Burn and George Post will accompany the exhibition. The artist will also produce Magnificent 7, a limited edition made to coincide with the exhibition.