Panic. For her latest exhibition,the artist has created a group of self-constructed beings, symbolic performances, and people with the unusual ability to devour themselves. With this body of work, Schutz continues to question paintingâ€™s ability to represent the impossible. 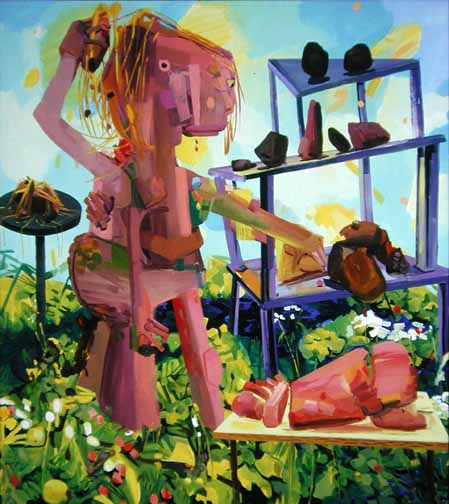 For her latest exhibition, Dana Schutz has created a group of self-constructed beings, symbolic performances, and people with the unusual ability to devour themselves. With this body of work, Schutz continues to question paintingâ€™s ability to represent the impossible. Her paintings evoke narrative time, sound and space collapsed into two dimensions. Schutzâ€™s intense palette and witty shifts between painterly means and ends provide a comic foil for her otherwise dark, perverse subject matter. Here, Schutz has provided a flawed world for her cast of characters. She is the aloof deity, watching her uncanny earth-spawn evolve from unaware, self-consuming and selfabsorbed infancy into full-blown sentient beings who develop language, make and break social contracts, attempt civilization-building and sacrifice their own bodies to build architecture. Their bizarre designs resemble prehistoric playground equipment or furniture made from human flesh and refuse. Also on view are paintings that deal more directly with the world at large, including a painting of what looks like a disjointed beach brawl between the Bush cabinet members and a painting of Jutta Koether that dares to capture the sound and tension of Koetherâ€™s performance while situating her in a less than ideal performance space. Schutzâ€™s unique ability to blend absurdist strategies with pragmatic logic culminates in wildly visionary paintings that reveal an intelligent and tangential imagination at work. Dana Schutz was born in 1976 in Livonia, Michigan and received an MFA in 2002 from Columbia University. She has had past solo exhibitions at the Nerman Museum of Art / JCCC in Kansas City, LFL Gallery and Galerie Emmanuel Perrotin, Paris. Her work has also been included in exhibitons at the Venice Biennale 2003, Prague Biennial 2003, Victoria Miro, London, the Saatchi Gallery, London, and the Kunsthalle Mannheim. She lives and works in Harlem, New York.