The Exclusive - On the Politics of the Excluded Fourth. After documenta 11 participant the artist already showed a variant of his still uncompleted project. Several of the original figures and picture signs are attached to iron rods on an imaginary rotating disc. Large red letters on the roof of the merry-go-round announced the existence of a fourth power, the 'exclusive', supplementing the three familiar powers, the legislative, the judiciary and the executive. 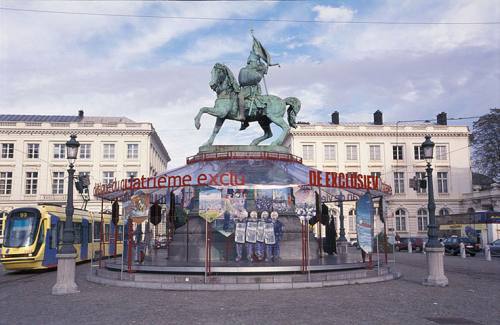 The Exclusive - On the Politics of the Excluded Fourth

In autumn 2002, the artist Andreas Siekmann realised within the frame of the exhibition project /ForwArt/ on Place Royal in Brussels a merry-go-round that rotated in the opposite direction of the traffic on the circle around the equestrian statue of Gottfried von Bouillon. Large red letters on the roof of the merry-go-round announced the existence of a fourth power, the "exclusive", supplementing the three familiar powers, the legislative, the judiciary and the executive. Life-size human figures, fixed or moving on one spot, as well as hexagonal signs paraded around the monument.

After /documenta11/ participant Siekmann already showed a variant of his still uncompleted project, /The Exclusive - On the Politics of the Excluded Fourth/ , in 2002 at the Salzburger Kunstverein, as well as in Brussels and during a short stop in Dresden (where the exhibition was banned by the city), he now presents a new version of the work at Galerie Barbara Weiss. Several of the original figures and picture signs are attached to iron rods on an imaginary rotating disc. At the centre of the imaginary disc, a model of the Dresden version of the merry-go-round revolves around itself on the turntable of a record-player. The red title letters of the merry-go-round hang from the gallery's ceiling, outlining its circumference. The installation is supplemented by photos and project sketches, as well as by a series of hexagonal computer prints ordered thematically on the walls. They illustrate in detail and from different perspectives the scenarios from which the figures could stem.

All of the project's picture motifs deal with the establishment of zones in which, among other things, human rights are abolished through the declaration of a state of emergency. This is a state of undecidedness between fact and law, existing, for example, in deportation airports, refugee camps, prison blocks, or Philippine sweatshops, but also in any area encircled by police forces or inside the red zones at summits from Seattle to Genoa. On the merry-go-round in Brussels, for instance, the presidents of the World Bank and the IMF constantly greeted each other, a border official was on the chase, policemen blocked access with their shields, and a service worker advertised... In the gallery version, figures of seamstresses can be seen manufacturing sneakers, as well as a refugee with documents and a border official. The historical figures of Dante and Virgil are the central protagonists and constitute the leitmotif of the entire work complex. As in the historical model, Dante Alighieris /Divine Comedy/ (1311-21), they can traverse all zones corresponding to the circles of purgatory and hell in their capacity as narrators and observers. In Andreas Siekmann's computer drawings, the ghostly presence of Dante and Virgil is alluded to by means of white outlines on top of the picturesque image motifs that often contain art-historical references.

In contrast to his earlier, comprehensive experiences with the medium of drawing - the /Soonsbek/ 1993 project /Square of Permanent Reorganisation/ , in which Andreas Siekmann included ideas of residents living around a "dead" town square as alternative development proposals that were displayed on the square in the form of 160 drawings and put up for discussion, or /From: Limited Liability Company/ , a work comprising more than 200 sheets that were shown at Portikus and at /Documenta11/ - the pictures of /The Exclusive - On the Politics of the Excluded Fourth/ , composed of hundreds of colour surfaces, are no longer drawn in the actual sense, but created on the computer via mouse clicks. Siekmann draws the images using WORD, thus continuing the debate on the typification and standardisation of sign languages as a reflection of the social power relations with which/ From: Limited Liability Company/ was concerned. These relations are now staged in public space using the mechanics of a merry-go-round.