Performance as part as 'Window Cleaning Days': Over gathers seven artists and collectives from around Europe. Without a specific premise, the exhibition presents new and recent works shown in London for the first time. Some of the artists have responded to the title of the show drawn from a song by emerging London-based sound artist Dan Wilson. 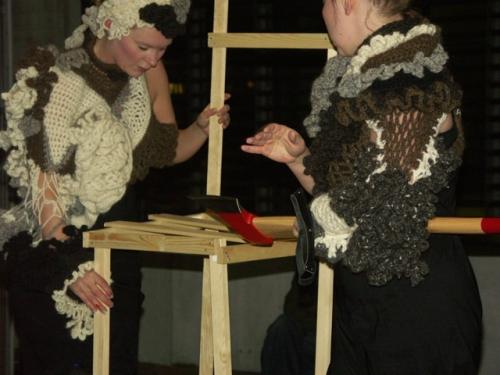 The Icelandic Love Corporation will perform, as part as Window cleaning days are over, presented at the Empire until 12th December 2004.

Followed by a finissage drink in the gallery.

Window Cleaning Days are Over gathers seven artists and collectives from around Europe. Without a specific premise, the exhibition presents new and recent works shown in London for the first time. Some of the artists have responded to the title of the show drawn from a song by emerging London-based sound artist Dan Wilson.

Bad Beuys Entertainment is an artist collective founded in 1999 in Cergy-Pontoise (greater Paris). BAD BOYS ENTERTAINMENT is the name of a major American hip-hop label. In BBE, Boys has been replaced by Beuys. The name BBE indicates the group's point of departure and its frame of reference: if its attitude isn't revolutionary, it is certainly a critical one, targeting the spheres of mass cultural production. For this exhibition, they are presenting two new works. The photograph Sauvageons is a self-portrait, staged at a suburban bus stop. Four models, have been cast to represent the group members wearing track suits at a bus stop. The second piece is described by the collective as "deluxe junk". The Chinese stuff refers to (industrial) ''tableaux'' one can find in Chinese restaurants or fast-foods. These are light boxes containing a mechanism built to render a kinetic effect, providing the object with a kind of magic. Idyllic scenery, these photomontages - touched up photographs - usually represent exotic landscapes: luxurious nature with azure skies and fertile downs, sometimes with a waterfall.
Recent shows include: FIAC 04; CAC, Meymac (2004, group show); Glassbox, Paris (2004, group show); Galerie Corentin Hamel, Paris (2003, solo show); Confluences, Paris (2002, group show).

Vanessa Billy uses industrial materials from PVC and rubber to steel and glass to conceive sculptures oddly resembling everyday objects. Yet, Billy's works are vain in that they fail to perform a specific task. Midway, 2004 while evoking the rubber curtain through which the luggage appears at the baggage reclaim, claims a new significance in the gallery environment. Made of brightly coloured PVC and mirror, Other's people fire sits in the middle of the gallery. It suggests an inner confusion which access is denied by fragments of mirror reflecting the viewer and its surroundings.
Vanessa Billy was born in 1978 in Geneva, Switzerland. She lives and works in London. Recent shows include: The Standpoint Gallery, London (2004, group show), Mad03 Festival (2003, group show); MadridLos29enchufes / Madrid (2003, group show).

Seamus Harahan's video works picture day to day matters and environments. In Il Mercenario, Harahan is documenting a Belfast street scene of a Drunk, who might have trained as a Boxer. Juxtaposing the visual with Western music, the "Boxer" turns into a dancing Cider Cowboy of the urban sprawl. By choosing the elevator for projection the viewer is forced into a 1:1 encounter with Il Mercenario.
Seamus Harahan was born in 1968 in London. He lives and works in Belfast. Recent shows include: Project Arts Centre, Temple Bar, Dublin (2004, solo show); ZÃ© dos bois Gallery, Lisbon (2003, group show); Golden Thread Gallery, Belfast (2004, group show); Irish Museum of Modern Art, Dublin (2002, group show). He will be showing at Gimpel Fils from 25th November 2004 to 7th January 2005, and has been selected amongst 13 other artists to participate in the first Northern Irish representation at the 51st Venice Biennial (2005).

Juneau/projects/
Ban this: the remix is a multimedia installation comprised of prints, a video and an audio element. Initially conceived for the Road Show, 2003 (Grizedale), Ban this consisted of asking people to write their own lyrics and sing their song along tracks composed by juneau/projects/. Ban this: the remix present the remixed version of these songs as well as magnified lyrics sheets by children. The video features Cosmo, an American child performing his song.
Juneau/projects/ is Philip Duckworth, born 1976 in Iselohn, Germany and Ben Sadler, born 1977 in Birmingham.
Recent shows include: The Showroom, London (2004, solo show), fa projects, London (2004, solo show), Romantic Detachment at PS1, New York (2004, group show).