An in-depth look at an intersection between African American and Asian American cultures from the 1970s and 1980s. The nearly fifty works in different media by nineteen contemporary American artists of diverse backgrounds interpret political and philosophical connections among people of color, as well as explore their resonance in pop culture and urban life. Curator Christine Y. Kim 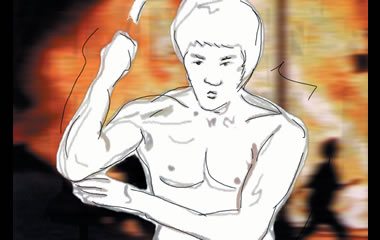 "Hybrids exist everywhere, most definitely in urban cultures, vernaculars and dialects, art forms, and even polymorphic identities...and sometimes it isnâ€™t until we trace the multiple lineages and their intersections that we see how cross-pollination is the norm, and singularity or purity is really the blip on the radar screen."
- Black Belt Curator Christine Y. Kim

From December 11, 2004 - February 12, 2005 Santa Monica Museum of Art presents Black Belt, an in-depth look at an intersection between African American and Asian American cultures from the 1970s and 1980s. The nearly fifty works in different media by nineteen contemporary American artists of diverse backgrounds interpret political and philosophical connections among people of color, as well as explore their resonance in pop culture and urban life.

Back in the day when Carl Douglasâ€™s song Everybody was Kung Fu Fighting was a hit, and Bruce Lee was making his last film Game of Death, co-starring Kareem Abdul Jabar, young people were creating the foundation for hip-hop culture with their break-dancing and rhyming in the Bronx. The Asian immigration boom was changing the urban landscape of Los Angeles, San Francisco, and New York. Black Belt reflects this unique cross-cultural fascination with Bruce Lee, Kung Fu, and Eastern martial arts imagery in a wide range of works in different media, including: a video game collaboration between Mark Bradford and Glenn Kaino; neon Ninja throwing stars by Kori Newkirk; watercolors by Patty Chang; a movement-sensored sound chamber by Luis Gispert; a multi-channel hopfu-inspired video wall by Rico Gatson; and a sound work by Sean Duffy.

Organized by Christine Y. Kim, The Studio Museum in Harlem, Black Belt is accompanied by a 100-page catalog including a conversation among some of the artists in the exhibition, and essays by Kim, Latasha Natasha Nevada Diggs, and Vijay Prashad.

Monday, January 10, 7:30 pm
James Bridges Theater, UCLA
The Last Dragon
A screening of Berry Gordy's iconic 1985 film that illustrates the commanding influence of kung fu film on African American audiences. Followed by a discussion with actor and martial artist Taimak, star of The Last Dragon, and Warrington Hudlin, producer of such films as Boomerang, and House Party, and curator of a monthly martial arts series at the Museum of the Moving Image, New York. In collaboration with the Ralph J. Bunche Center for African American Studies and the Asian American Studies Center at UCLA.
Parking available in Lot 3 for $7.
Admission free

SMMoA is open Tuesday through Saturday 11 a.m. to 6 p.m., closed Sunday, Monday, and all legal holidays. For further information about exhibitions and educational programming, please call 310 586-6488 or visit the website.

Black Belt is made possible in part by the Peter Norton Family Foundation. Additional support has been provided by MTV Networks. The exhibition catalog is funded in part by Rebecca and Martin Eisenberg.