Given the renewed interest in both figurative art and the resurgence of drawing-based practices the show seeks to illuminate a number of distinct approaches to narrative drawing by a group of emerging artists based in Europe and the United States. Privileging storytelling, the works in the exhibition variously explore issues of truth, reportage, fantasy, allegory, craft, modernity, and classicism. Making reference to illustration, many of the works in the exhibition juxtapose everyday imagery with quasi-surrealist narratives. Curated by Micaela Giovannotti. Contemporary in White Room Sean McFarland's hallucinatory photographs, curated by White Columns' Chief Curator Matthew Higgs 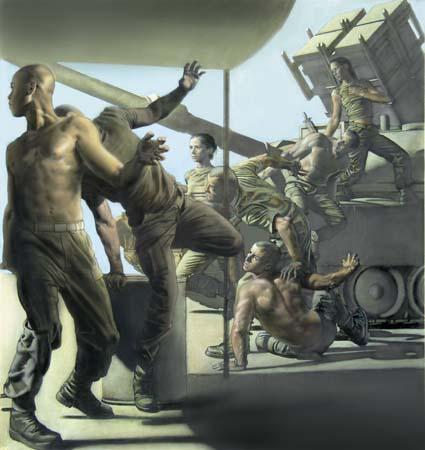 Given the renewed interest in both figurative art and the resurgence of drawing-based practices '100% Acid Free (neo-narrative works on paper)' seeks to illuminate a number of distinct approaches to narrative drawing by a group of emerging artists based in Europe and the United States. Privileging storytelling - of all hues - the works in the exhibition variously explore issues of truth, reportage, fantasy, allegory, craft (draftsmanship), modernity, and classicism. Making reference to illustration - and often evocative of the languages and mannerisms of children's books and fairy tales - many of the works in the exhibition juxtapose everyday imagery with quasi-surrealist narratives.

Recalling paperback book cover illustrations, Ben Blatt's decoratively decadent, and monstrous allegories combine a Renaissance-like palette - that recalls Old Master frescoes - with cruel medieval narratives. Fulvio di Piazza's hyper-realistic, hallucinatory landscapes simultaneously invoke the Sicilian Baroque of Bosch and Archimboldi as well as the retro-futurism of Star Wars. Tim Maxwell's minutely detailed drawings - rendered in ballpoint pen - riff on science fiction illustration with their fantastical images within images. Tony de los Reyes portrays iconic doomed vessels that appear as if sinking in waves of sensual, curvy lines. Angelo Filomeno's Accident drawings suggest narratives in which elements from his surroundings and fantasies morph into his healing bones. Some neo-narratives can be "read" almost literally, such as Nicola Verlato's Caravaggio-esque figures that appear to have climbed out of one work and fallen into another: journeying from work to work like chapters in a book. Joyce Korotkin's Cameos are tales of art world characters making brief cameo appearances amidst their own motifs. Hans Op de Beeck seeks to redefine video, combining hand-drawn animations with an actor's performance to create a literal moving picture show, as if an Old Master sketch had suddenly come to life. Finally returning to reality, Steve Mumford's on-the-spot watercolor journals of daily life in Baghdad record the juncture where life greets art.

About the curator: Micaela Giovannotti is US editor for Tema Celeste Magazine. She is also an independent curator and critic based in New York.

Sean McFarland's hallucinatory photographs are derived from his own images of the urban environment which he reassembles into three dimensional photographic collages that juxtapose geographically and architecturally unrelated aspects (e.g. a foreground image taken in one neighborhood might be combined with a middle ground image shot in another, which might be set against a skyscape from a third, etc.). McFarland subsequently photographs these three-dimensional tableaux to produce disorientating images where the city - invariably San Francisco or New York - becomes an uncanny model-like topography that is at once familiar and unfamiliar.

Sean McFarland lives and works in the Bay Area where his work has been included in group shows at Playspace, Adobe Books, and Galeria de la Raza, San Francisco. He had a solo exhibition at the Jack Hanley Gallery, San Fransisco in 2004. This is his first solo show in New York. McFarland graduated with a MFA from San Francisco's California College of the Arts in 2004.

In 2001 Althea Thauberger placed an advertisement in a Victoria, British Columbia, entertainment weekly seeking young female singer/songwriters for a film project. From the resulting replies Thauberger would eventually collaborate with eight young women, initially recording their original songs in a professional recording studio, and then subsequently filming their individual performances against the backdrop of idyllic West Coast Canadian landscapes. The resultant film 'Songstress' - part-screen test, part pop video - is at once sincere and cruel, and explores the performers conflicting desires that are pitched somewhere between innocence and ambition.

Althea Thauberger lives and works in Vancouver, Canada. Her work has been exhibited widely in Canada including solo shows at Artspeak, and the Helen Pitt Gallery, Vancouver. Her work is included in the traveling exhibition 'Baja to Vancouver: the West Coast and Contemporary Art' currently on view at the CCA Wattis Institute, San Francisco. In 2005 she will have a solo 'Matrix' exhibition at the Berkeley Art Museum, University of California, Berkeley. This is her first solo show in New York. Thauberger graduated with a MFA from the University of Victoria in 2002.

Byungwang Cho presents his "Geometric Knife Drawings," photographs that he has manipulated by scraping off the top layers of emulsion with the tip of a knife. Each photo has thousands of these linear cuts in its surface, made with varying degrees of depth and pressure. The depth of the cut determines the color that is revealed and therefore the appearance of the final product. The artist makes the photograph's original image more or less irrelevant through a high degree of manipulation. These prints have a direct relationship to painting traditions, with their bands of color and geometric abstraction. Byungwang Cho has had solo exhibitions at LOOP, Seoul; im n iL Gallery, Brooklyn; and PS Gallery, Brooklyn. He has also participated in group exhibitions internationally, including a recent show at National Museum of Contemporary Art in Korea. He holds a MFA in painting from Pratt Institute and a BFA in painting from Seoul National University.

Megan Cump presents "Dark Matter." This series of photographs draws from the elusive astronomical phenomena of the same name, while suggesting deeper psychological interpretations. Several photographs capture small snapshots floating, eerie and dream-like, within the forest. Other photographs, shot during a blizzard, suggest the infinite, with snowflakes coalescing into galactic clusters. These two variations on landscape suggest inner and other worldly states. Cump holds a BA from Macalester College and a MFA from the School of the Art Institute of Chicago. Her work has been included in recent group exhibitions at Hudson Clearing, NY; Berlin Kunst Projekt; the Bronx Museum of Art; and others venues. This is her first solo show in New York.