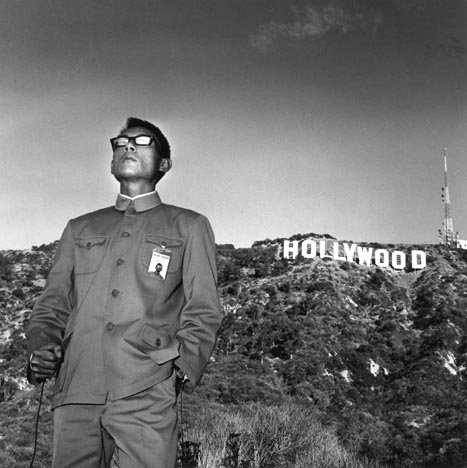 Tseng Kwong Chi: Ambiguous Ambassador, a new exhibition to be held at the Stephen Cohen Gallery January 6 - March 5, will feature the expeditionary self-portraits of this world-renowned photographer, performance artist, and art world socialite. The show, which will commence with an opening reception on January 6th from 7 - 9PM, will feature tongue-in-cheek images of the artist posing as a Chinese Communist dignitary or "Ambiguous Ambassador" in a world utterly alien to his persona, complete with the classic Mao suit, dark glasses and identity tag stamped "Slut for Art". By placing his character in stereotypically touristy sites around the world, Kwong Chi addresses issues ranging from personal identity, to cultural identity, to finding one's place in the world, to the exploration of the nature of tourism, tourist photography, and landscape painting.

Born in 1950 in Hong Kong, Kwong Chi moved with his family to Canada in 1966 and eventually adopted New York as his home in 1979. Soon thereafter, he met Keith Haring and other members of the East Village scene, which became central to his life and work. With best friends Keith Haring, Kenny Scharf and Ann Magnuson, Kwong Chi established himself as a famous documentarian and denizen of the spirited New York downtown club scene. He also became Keith Haring's official photographer and created an archive of over 50,000 images recording Keith Haring at work, including the early subway drawings and later the large-scale commissions.

Prior to his death in 1990, Kwong Chi evolved two major bodies of work during his brief career. The development of his "Ambiguous Ambassador" persona in the late 1970s became the center of an ongoing performance piece where the artist traveled through the US, exploring American culture. This piece, "East Meets West" expanded through the years as he inserted himself in stereotypically tourist sites from the Eiffel Tower to Kamakura, Japan, from the Statue of Liberty to Hollywood, and finally to the grandness of nature. Ricocheting between nature and culture the artist developed a massive series of self-portraits which became the "Expeditionary Series."

Kwong Chi's work has been exhibited in many solo shows, including a major retrospective at the Center for Creative Photography in Tucson, which has traveled to numerous museums. His work is included in many public collections, including the San Francisco Museum of Modern Art, the New York Public Library, the New School in New York, the Museum of Fine Arts, Houston, the Walker Art Center, the Wellesley College Art Museum, the Los Angeles County Art Museum, the Hallmark Collection and the Solomon R. Guggenheim Museum. His work continues to be included in many solo, group and traveling exhibitions

In conjunction with Tseng Kwong Chi: Ambiguous Ambassador in the main gallery, Brian Finke: 2-4-6-8 will be on display in the viewing room at the Stephen Cohen Gallery January 6 - March 5. The exhibition, which will kick-off with an opening reception at the Gallery on Thursday, January 6 from 7 - 9PM, will reveal the private lives of teen cheerleaders and football players and the conflicting roles they must adapt to in order to be accepted by their fellow teammates.

Diversity in uniformity is what fascinated Finke about his chosen subject: cheerleading competitions, photographed in New York City, Pennsylvania and Florida. He followed competitors from 175 schools all over the US, witnessing moments of emotion as they practiced, prayed and cried. In order to reveal the girls' identity focused on their subtle expressions and gestures. The images also reveal the development of these teenagers and how they address such issues as social behavior, sexuality and individuality.

To compliment his series on cheerleaders, Finke decided to turn his camera toward the issue of male bonding amongst football players. Like their female supporters, these male teens are also wrestling with many of the same issues. Viewers will gain a clear feel of the conflicting roles these young men must adapt to in order to be accepted by their fellow teammates and the coaching staff.

BRIAN FINKE graduated from the School of Visual Arts in New York City in 1998 with a BFA in Photography. His innate ability to focus on and capture intimate moments within very public activities while at the same time giving us the feel that this was all staged for our benefit has been featured in periodicals such as The New York Times Magazine, The New Yorker, Details, Esquire, Time and Newsweek, as well as in the book Here is New York. He has received several prestigious grants and awards, including the Award of Excellence from The Alexia Foundation for World Peace (1998) and the World Press Photo Masterclass Award (2001). Finke`s photographs have also been exhibited internationally and are included in collections worldwide.

The Stephen Cohen Gallery is located at 7358 Beverly Boulevard in Los Angeles and is open Tuesday - Saturday, from 11a.m. to 5 p.m., and by appointment.