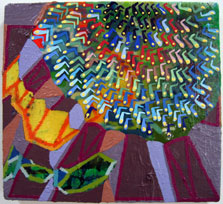 The San Francisco Art Institute (SFAI) Walter and McBean Galleries are proud to announce seamarks, an exhibition of works by visual and sound artist Steve Roden, the Art Institute's inaugural Nimoy Artist-in-Residence. Featuring a new body of work created by the Los Angeles-based artist for the McBean Project Space, the exhibition will be on view January 14 - March 12, 2005, with an opening reception Friday, January 14, 5:30 - 7:30 pm.

Working for over a decade as both a visual and sound artist, Roden has had recent one-person exhibitions of painting and sculpture at Susanne Vielmetter Gallery in Los Angeles, and had an installation purchased by the Museum of Contemporary Art San Diego for its permanent collection.

A November 2003 Artforum article places Roden's sound work among a group of 'neo-modernists' who, like the postmodernists, work from found sources but, like the modernists, concentrate on purity, reduction, and formal abstraction. All of Steve Roden's art, including his painting, sculpture, drawing, film, and sound-installation, is rooted in conceptualist strategies, using found or arbitrary systems to determine the formal parameters of the work.

In seamarks, Roden performs a type of translation on the text Amers (Sea Marks, 1957), written by the French author Saint-John Perse. Roden converts letters and words from Perse's text into numbers, measurements, and corresponding colors. He has used the text as inspiration to generate a whole new body of work, including new paintings, sculptures, drawings, a sound work, and an animated film. The drawings for the animation are each based on the letters and words on the first page of Perse's book. For each of the 99 drawings that make up the animated short, Roden translated 11 consecutive letters from the page, containing 1,089 letters in total, into measurements for waveforms.

'What I wanted to do,' says Roden, 'was find a way to enter the text and begin a dialogue with it, even if the dialogue leads far away from the original intention of the source.' Roden was driven to find the text after he had read that it was a favorite of furniture maker and sculptor Harry Bertoia's. A Bertoia admirer, Roden says, 'I wanted to read and respond to the text and have that give me more access to what inspired [Bertoia] and his process.'

This is not Roden's first experimentation with such sources. His earlier projects have included a translation of a Herman Hesse book using 26 differently colored green pencils, a translation of a Swedish book into English using the sounds of the words read aloud to suggest English equivalents, and a project based on the title of Jacques Cousteau's first book, The Silent World. In that work he uses measured equivalents for every letter of the alphabet.

Besides premiering this new work at the San Francisco Art Institute's McBean Project Space as part of his residency, Roden will give a public lecture, produce a sound performance, visit classes, and work one-on-one with SFAI students. Steve Roden's public lecture is March 2, 2005 at 7:30 pm at the Art Institute Lecture Hall on its Russian Hill campus.

Steve Roden received his MFA at the Art Center College of Design in Pasadena, Calif. His work has been shown at the San Diego Museum of Contemporary Art, La Jolla, the Pomona College Museum of Art, Claremont, the Scottsdale Museum of Contemporary Art, Scottsdale, the Teaching Museum at Skidmore College, Saratoga Springs, the Santa Barbara Contemporary Arts Forum, the Centre George Pompidou Museum, Paris, the Center for Curatorial Studies, Bard College, New York, and the Orange County Museum of Art, Newport. His work was included in "Snapshot" at the UCLA Hammer Museum, Los Angeles, and in "Treble" at the Sculpture Center, New York.

seamarks appears in conjunction with the Walter Galleries exhibition The Intimate Collaboration: 25 Years of Teaberry Press.

EXHIBITION OF INTAGLIO PRINTS FROM TEABERRY PRESS
'The Intimate Collaboration: 25 Years of Teaberry Press' is presented At the Walter Galleries by the press's founder, SFAI faculty Tim Berry.

The San Francisco Art Institute (SFAI) Walter and McBean Galleries are proud to announce The Intimate Collaboration: 25 Years of Teaberry Press, a survey exhibition of intaglio prints produced by Teaberry Press, founded by San Francisco Art Institute faculty Timothy Berry. Featuring dozens of intaglio prints by some of America's most distinguished artists, the exhibition will be on view January 14 - March 12, 2005, with an opening reception Friday, January 14, 5:30 - 7:30 pm. Berry will offer a walk-through of the exhibition on Tuesday, February 8 at 6:30 pm.

The intimate setting and studio atmosphere that has been a trademark of Teaberry Press over the years has attracted artists ranging from ceramists Robert Arneson and Peter Volkus to painters Philip Pearlstein, Ed Paschke, Jim Nutt, William T. Wiley, and Pat Steir to sculptors and conceptual artists Claes Oldenburg, David Ireland, Terry Allen, and Christo. Works by all of these artists and many others are featured in the exhibition.

Teaberry Press is noted for collaborations with artists who are not traditionally printmakers. 'I like to work with artists who have never done etching before because of the unique perspective they would bring to the process,' says Berry. 'Non-printmakers tend to bring to the collaboration an emphasis on the content and concept of the work over the technical aspects of printmaking itself. In my experience, they often engage the process in a much more interesting way than traditional printmakers might.'

Intaglio printing, from an Italian word meaning 'carve,' uses recesses cut, engraved, or etched into a metal plate to hold the ink. After learning traditional etching techniques in Europe, and widely exhibiting his own intaglio prints, artist and master printer Tim Berry was invited to start his own intaglio workshop at Landfall Press in Chicago. Berry moved Teaberry Press to the San Francisco Bay Area in 1977.

This exhibition was curated by Sam Yates and organized by the Ewing Gallery of Art and Architecture, at the University of Tennessee, Knoxville. In the past decade and a half, it has been hosted by over 31 institutions in 18 states. It has been specially updated for the Walter Galleries with 12 new prints created over the past decade and a limited-edition artist's book from the SFAI Anne Bremer Memorial Library Rare Books Collection. This book, A Suite of Daze, was created by SFAI alumnus William T. Wiley in collaboration with Tim Berry in 1977.