Well known internationally since the early 1990s for his use of film as an art medium, McQueen experiments with pacing and editing, framing and unframing, movement and stasis. His films feature narrative and content as secondary to the physical or psychological fact of the moving image itself. McQueen will present four works 'Once upon a Time' (2002); 'Girls, Tricky' (2001); '7th Nov' (2001), and a new 16 mm film, 'Charlotte' (2004), which is a collaboration with Charlotte Rampling 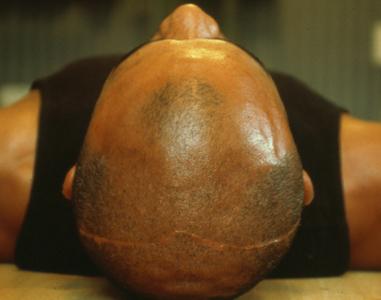 Marian Goodman Gallery is delighted to present a solo show of Steve McQueen. This is the first show of McQueen's work in the gallery since 2000. Well known internationally since the early 1990s for his use of film as an art medium, McQueen experiments with pacing and editing, framing and unframing, movement and stasis. His films feature narrative and content as secondary to the physical or psychological fact of the moving image itself.

Once upon a Time is one of Steve McQueen's most ambitious works to date. Inspired by photographs intended to represent to aliens what life on Earth is like, the installation is made up of 116 projected images chosen by NASA and sent into space on an exploratory journey across the universe in the late 1970s. In these images, which are still travelling through space at speed of 150 million miles per year on the Voyager II space probe, we glimpse an era-specifically 1977-and its optimism and belief in itself. The images represent modern life and the construction of Western culture and science, showing human and technological progress from the ordinary to the extraordinary to the absurd. In them poverty, war, religious conflict, and disease are notably absent. They are accompanied by unintelligible voices 'speaking in tongues' - a phenomenon known as glossolalia. This undecipherable, invented language is mostly associated with evangelist Christians or with religious ecstasy, but is in fact present in many cultures. The artist worked closely with William J. Clancey, Nasa researcher and advisor to the SETI (Search for Extra Terrestrial Intelligence) laboratory, and William J Samarin, linguist and professor emeritus in the anthropology department at the University of Toronto, to make Once Upon a Time.

McQueen says, "For me the images in "Voyager II" are all about our so-called knowledge. It's all about what we apparently know. With the sound, for sure, it's all about what we don't know, or 'nothing'. The idea of sound meaning nothing or sound that we don't know anything about is very interesting, coming from us to the situation where these images are there of what we 'know'. Just to put the two together leaves an ingredient missing. Though the images were planted in 1977, they have to do with the past, the present and the future... We're not living in the past, we're not living in the future; we're living in between... So limbo is what I'm interested in."

'Nov. 7th' recounts the experience of two brothers. The installation consists of a single projected slide - an image of the crown of a man's shaved, scarred head - and a recorded audio track. In one unprompted, uninterrupted take, Marcus (the man seen in the slide) offers a harrowing account of his role in his brother's accidental death from a gunshot wound, his own struggle to come to terms with his grief and guilt, and the resulting trauma faced by family members. As Charles-Arthur Boyer writes in the catalogue for ARC (2003) "What McQueen focuses on here is neither guilt nor the inevitability of fate, nor even the exploration of terror, but the way in which this story of killng will, when "expressed" by someone particularly charismatic, form an image in the mind of the beholder, and whether this image is manifested as a tragic experience. And yet, in the darkness, the image we have before us is very different, showing only the split skull of a body that looks as if it might be lying there on an operating table. In a way, this photograph exhibits a body that is disincarnate, and, without our realising, it is gradually filled by the enfolding voice of Marcus, which gives it substance."

"Girls, Tricky" documents a studio session with the artist Tricky over the course of 4 days. Like 7th of November, it is a collaborative work in which McQueen explores the construction of expression and sound, in this case via a moving image of the musician shot from the upper torso and head.

Steve McQueen was recipient of an OBE in 2002 and the Turner Prize in 1999. Born in London, he currently lives in Amsterdam. His work has been included in numerous exhibitions worldwide. Upcoming exhibitions include a project scheduled to open at the Prada Foundation in Milan in Spring 2005, as well as a survey show scheduled for 2007 at the Boymans van Beuningen in Rotterdam. He has had numerous one-man shows both here and abroad, most recently at ARC/Musee d'art moderne de la ville de Paris, Paris; Art Angel, London; Fundacio Serralves, Porto; and Fundacio Tapies, Barcelona. . Selected group shows in the last few years include "Utopia Station", the Venice Biennale, 2003; Documenta II, Kassel, Germany, 2002; and "Moving Pictures", at the Solomon R. Guggenheim Museum, New York, 2002, among many others.