By Gintaras Makarevicius. A series of screenings will take place at the gallery several times a year. Organised independently of the gallery's exhibition schedule and generally lasting for one week, each video surveillance is dedicated to an individual artist. 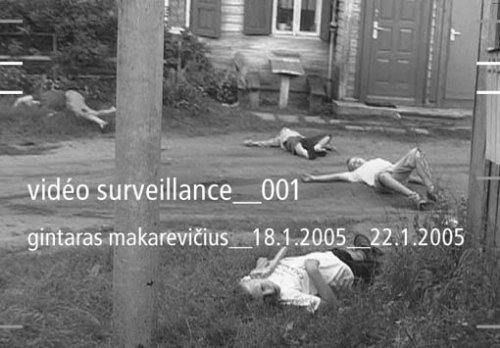 galerie schleicher+lange is pleased to announce the launch of vidÃ©o surveillance, a series of screenings that will take place at the gallery several times a year.

Organised independently of the gallery's exhibition schedule and generally lasting for one week, each vidÃ©o surveillance is dedicated to an individual artist.
In collaboration with international curators, galerie schleicher+lange presents video artists from a whole variety of backgrounds and nationalities whose works are not yet widely known in France, creating a space for discovery. Rather than presenting only the latest video piece, several films by the same artist are selected for each vidÃ©o surveillance, aiming to give an overview of the artist's work.
The videos of the artists presented will be included in the gallery's video archive which is about to be established and can be consulted on request.

For the launch of this series, galerie schleicher+lange is proud to present :
vidÃ©o surveillance_001
by Gintaras Makarevicius

Using a documentary approach in his films, Makarevicius' artistic practice is closely related to life, the passing of time and a coming to terms with the changing realities around us.

For the duration of vidÃ©o surveillance_001, three films representing a cross section of his work are to be screened at galerie schleicher+lange:

'Relatives' (2000, 24', BETA / DVD) shows an intimate portrait of Makarevicius own family in his native village. Documenting their everyday life, Makarevicius questions the life in rural Lithuania and demonstrates the severitie of the generation gap arisen since the collapse of the Soviet regime.

'The Pit' (2001/2002, 45' BETA / DVD)
Divided into the classic format of the four seasons, Makarevicius follows three generations of gravediggers working together in a rural village of Lithuania, documenting how Life unfolds in the constant presence of Death.

Similar to his previous works such as 'Relatives' and 'The Pit', Makarevicius succeeds to offer the audience an insight into the lives of the group of people he portrays. Despite the presence of the camera, Makarevicius achieves to create an atmosphere of trust and understanding; people seem to be at complete ease with his undertaking, following their every day life as if the camera was not even there. Makarevicius steps back in order to get closer to the essence of the subject discussed in his films, giving an almost objective account of the lives of different generations of people living in Lithuania at the present time.