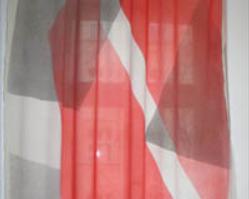 The artists in this exhibition have been asked to consider the word communism and to make a work in response to it. This process has elicited a variety of results, including small-scale experiments in social practice, re-imagined historical events, public activities, modest but practical proposals and future prototypes.

In 1902 Lenin published a book entitled 'What Is to Be Done? inspired by Nikolai Chernyshevsky's novel in which, amongst other things, a group of textile workers organise in response to their exploitation. A contemporary artwork called What Is t o Be Done? poses this question for today, and its inclusion in the exhibition Communism frames the question in relation to the term communism itself.

Communism is generally ringed around with caution, identified as a failed ideology and provided as proof positive that any system outside the current neo liberal hegemony is unthinkable. In opposition to this, certain strands of political theory, associated with the Italian Autonomia movement, perceive communism (or acts undertaken in the 'common name') to be present everywhere, only unrecognised, invisible or captured and oriented towards profit and it is from this second position that the exhibition departs.

Artists Projects
Susan Kelly has taken Lenin's original question 'What Is to Be Done?' and represented it today by gathering audiences' responses on slips of paper. This work has toured Russia, Finland and the US and has also appeared on the Internet. At Project, past suggestions and blank slips will be displayed on furniture taken from Rodchenko's design for the 'Workers Reading Room' of 1925. Klaus Weber has produced a to-scale model of a future building, made from mirror and glass. Called 'Psycho-Botanic-Mirror-House, Draft for Commune' it is mounted on a small table and will contain a living plant with hallucinogenic properties. The sculpture is accompanied by a series of photographs of the artist's friends emitting water from different orifices, to form a human fountain. Aleksandra Mir has designed the invitation, which doubles as a mail art work and includes an interview with Jim Fitzpatrick the original designer of the Che Guevara poster. Eva Berendes has produced a four meter high spray painted curtain, which will be suspended from a triangular track attached to the gallery ceiling, forming a screened off area at the centre of the exhibition. Using this space as a theatrical backdrop, Goshka Macuga and Lali Chetwynd will stage a performance with two elements running simultaneously: one, a Lenin impersonator delivering a speech in German, the other a recreation of the Dadaist Cabaret Voltaire, with costumes and masks designed by the artists. Veit Stratmann's sculpture 'chairs' will be positioned in Project's foyer. This work consists of wheeled office chairs joined back to back. They allow people to sit and move together around the building on the basis that they act collaboratively. Seamus Nolan will set up an open workshop in one of Project's storage spaces at the front of the building. Here abandoned and reclaimed bicycles will be reconfigured into working machines. In collaboration with the Dublin City Gallery The Hugh Lane, artists Declan Clarke and Paul McDevitt will install a concrete table tennis table on O' Connell Street as a monument to leisure on Dublin's main thoroughfare. Table tennis bats will be available free of charge from the Dublin Tourism Information Centre on O' Connell Street.

Film Screening
Hito Steyerl's film 'November' addresses the theme of revolutionary gesture in a supposedly post-revolutionary context. The film shows clips of a martial arts movie that Steyerl made with her friend Andrea Wolf, as well as material connected to Wolf's working with Kurdish separatists, work which eventually lead to her being shot by security forces in East Anatolia. 'November' will be screened in Project's Cube from January 21 to January 29.

Seminar in Collaboration with the Hugh Lane Gallery

On January 29th Project Arts Centre and the Hugh Lane Gallery will host a short seminar on the topic of communism and the issue of immaterial labour and cultural work. Speakers will include Eric Alliez, Maurizio Lazzarato, Hito Steyerl and Alberto Toscano. If artists produce the ultimate model of precarious casual working conditions, free labour and flexible subjectivity, how can we conceive of cultural work as critical, or the artist's existence as in any way autonomous under these new conditions? The seminar will explore what is meant by the terms immaterial labour, affective labour, flexible collective intelligence, and free labour. It will also address more generalised changes in work and working conditions and what currently constitutes artistic, creative and cultural work. Are the ways in which artists make a living today, and prevalent forms of relational art practices simply ideal models of Post-Fordist production? Finally, in a neo-liberal flexible economy like Ireland's where the marketing of culture has played a large role in the 'economic miracle', how can we conceive of critical, political, or affirmative (collective) art practices? Following the seminar Hito Steyerl will talk about her film 'November,' which will then be screened in the Space Upstairs at Project. The seminar will be at Project and start at 1pm.Admission to the seminar is free but please book early to ensure a place.
Project Arts Centre, Dublin exists in order to encourage and support emerging and established artists in creating innovative work and to engage the public in a dynamic encounter with that work.

Communism is presented in co-operation with the British Council, Dublin City Gallery The Hugh Lane and the Goethe-Institut Dublin.