From our Cold Hands 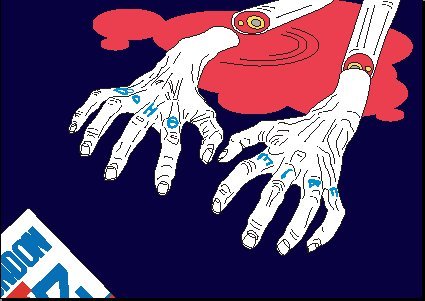 Drawings and other paper work

This exhibition of drawing and works-on-paper brings together the work of seventeen young artists who, in varying ways, question and challenge the borders that define this medium for today.

Klaus Weber shows 'mushroom drawings' which arose of their own, through the spores of the mushroom, over the course of several days. They evolved without the direct intervention of the artist - automatic drawings.

In a reversal of roles, Heide Deigertâ€™s distorted self-portraits, while looking computer made, are in fact hand drawn.

Re-drawing architecture and urban planning, Alex Hamilton's work starts from photographs of the Turner Building in East London, which he then photocopies, retouches (by drawing on the copies), and photocopies again, so it is no longer clear how the whole work came about or how it is to be defined photo, drawing, or copy? Is he obscuring the boundaries between 'mechanical reproduction' and 'original' or creating a synthesis of both?

In her work Master-Piece Olivia Plender questions the clichÃ© of the master-piece. She draws her comics in classic style, but shows them only as copies in printed form. She makes the copy the art work and keeps the original under lock.

In contrast to that, Micki Tschur, presents â€˜unfinishedâ€™ personal narratives - excerpts from her sketchbook - as original drawings.

With her diary-like drawings Norwegian born Janne Lervik depicts stories about Berlin, the city of her choice.

Max Mason contributes a CD (as an edition), containing a sound piece which is heard and a drawing which is not seen, in the show. So we have a 'sonic' and a 'hidden' drawing, the latter viewable only with the purchase of the CD.

Dirk Krecker uses old mechanical typewriters as his drawing-pencil, hammering the buttons of the keyboard to produce his marks on the paper, and delivers for the London show low-flying (attacking or crashing?) war-planes.

Lucie Beppler is dedicated to small formats within which she too circles around personal and intimate issues. She often wounds and cuts the paper, drawing, with a knife. For this show she contributes drawings on un-fixed photo-paper that remind us of 'telephone-doodling,' something many of us do.

Thomas Kilpper has drawn with his chain-saw. Cutting up the entire parquet of a US Army basketball hall, the floor becomes a printing block for his pictorial narrative. In this show he presents portraits of the former Nazi officers under Reinhard Gehlen, who after the war received further training by the CIA to become agents of the 'Bundesnachrichtendienst', BND.

The technologically up to date Nils Norman uses solely the computer and its software to make his illustrations: the mouse is his pencil. In this way he develops his critical image-world of ironic proposals to repair or improve various social problems.

The Berlin/Paris/New York based artist-group Bernadette Corporation puts a pornographic picture of a blow job (downloaded from the internet and generated on the computer) on exhibit. As they stretch it on frame and canvas they ask: to what extent do frame and canvas help make a work a real value and real art?

Using brush and pencil Jeremy Glogan appears to keep faith with artistic tradition - but playing with the various styles of art history, he disrupts and destabilizes his work permanently.

Amelie von Wulffen not only integrates photography into her drawings, with her paint-over she creates a completely new base for her picture production. She sort of builds dream-like spaces but leaves them in the next moment to dedicate herself with sensitive/tender strokes to private stories or famous stars or personalities like Alexander Solchenyzin.

Michael Beutler contributes floor-pieces dozens of enlarged triangular â€˜Sun-Kist-boxesâ€™, made in a do-it-yourself manner, spread across the floor. Does he provoke a deconstructive game or is it only the occupation and claiming of space?