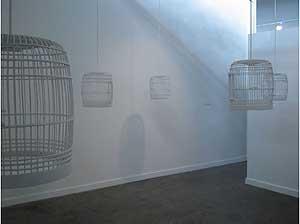 Paul Rodgers/9W is pleased to present its first solo exhibition of Joe Diebes. Known to the vanguard performance world as a composer of operas and psychoactive soundscapes, Diebes has more recently been developing a unique convergence of contemporary music and art for a gallery context. premonitions will feature several sound-based installations and constructions, all of which employ a spatial arrangement of simultaneously active sound sources. Using customized high and low technology, these works are in continual transformation, designed never to repeat for as long as they exist.

Striking visual and conceptual cues anchor the exhibition, while sound animates the space from all directions. In Aviary, empty bird cages communicate throughout the gallery in otherworldly tones created from digitally altered bird calls. sotto voce, a wall mounted piece, continues this special engagement in a vertical orientation, emitting whispers and white noise from different locations across a monochrome visual field. String Quartet No. 2 is an immersive installation of phantom musicians who continue to reproduce their final performance while the composition itself changes. Each work offers a wealth of visual and sonic perspectives, from the individual voice to the overall composite texture.

Technology is the medium though only a part of the message. In Diebes' conception, the natural and the synthetic as well as the sonic and the visual rub together in unexpected ways, ultimately inviting a creative response from the viewer/listener. The refrains of physical absence and infinite variation reflect a contemporary culture in which distinctions between man, machine, and the natural environment are permeable and susceptible to arbitrary manipulations.

Joe Diebes' background includes a degree in Literature and Philosophy from Yale University, composition studies at Juilliard, and private sessions with music/art pioneer La Monte Young. From 1996-2003 he was the musical force behind the arts collective GAle GAtes et al., described by The New York Times as "an adventurous troupe with one foot in the world of postmodern art and the other in downtown performance." He has received numerous commissions from organizations such as the College Art Association, MATA, and Engine 27. He currently has solo exhibitions at Grand Central Art Center in Santa Ana, CA and JSP Media Gallery in Seattle.