Soft Materials. The film was shot in the Artificial Intelligence Lab at the University of Zurich where scientists research 'embodied artificial intelligence' and creates a new image of 'man and machine', thus continuing artist's aspiration to revisit the questions of the early Modern period. Also connects with 1960's performance practices, which honed bodily relationships to physical objects. 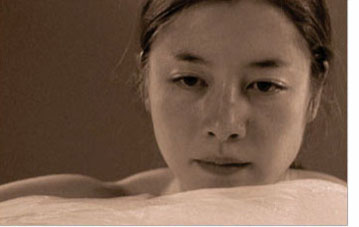 The Showroom is delighted to announce that it has commissioned Daria Martin to make a new 16mm film, Soft Materials, for presentation at the gallery in January 2005. This will be her first major solo show of new work in London.

Soft Materials was shot in the Artificial Intelligence Lab at the University of Zurich where scientists research 'embodied artificial intelligence'. This cutting edge area of AI produces robots which, rather than being programmed from the head down by a computer brain, instead learn to function through the experience of their physical bodies.

Soft Materials introduces the robots to two performers, one man and one woman, trained in body awareness and acutely sensitive to the nuances of movement. These performers shed skins of soft fabric, bearing their joints like the frank structure of a machine, and then, naked, they perform a series of dances with the robots. Creating intimate relationships that are in turn tender, funny and eerie, they bend flexible human fantasy around tough materials.

Soft Materials creates a new image of 'man and machine', thus continuing Martin's aspiration to revisit the questions of the early Modern period. However, Soft Materials also connects with 1960's performance practices, which honed bodily relationships to physical objects; one inspiration for the project is Robert Morris's film, Neoclassical, which depicts an idealised interaction between his sculptures and two viewers.

Soft Materials, created during what some call the 'Digital Revolution', sees a return to the physical object in an arena of embodied play. Ironically, the objects in question are technological creations, and ones that mimic our own animal physicality. Soft Materials takes to a new level Martin's ongoing concern with tangible fantasy and the power of artifice.

Daria Martin has exhibited at Hotel, London, and Andrea Rosen Gallery, New York. Her work has been included in high profile shows such as 100 Artists See God, ICA, The Moderns, Castello di Rivoli Museum of Contemporary Art, Turin, Art Now Lightbox, Tate Britain and In the Palace at 4am, Asprey Jacques.

Project supported by The Wellcome Trust, The Moose Foundation for the Arts, The Elephant Trust, and the AI Lab at the University of Zurich. Special Thanks to Dr Daniel Bisig and Dr Rolf Pfeifer.