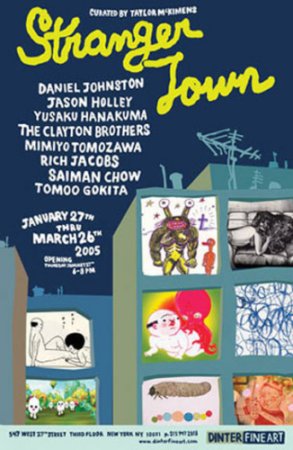 Creative energy has increasingly been pooled into areas other than those of the New York galleries and contemporary art world. More and more artists find themselves unable or unwilling to go through the traditional steps of the starving artist trying desperately to get noticed, and instead find alternative routes to creative achievement. Whether it be illustration, comics, music, etc., many artists have gone on to push the limits in their chosen fields.

Stranger Town features eight successful artists who have each risen to prominence in areas outside the walls of the established art world.

Daniel Johnston is an artist and musician from Austin Texas, who is best known for his incredibly honest and powerful heartfelt lo-fi songs, which have greatly influenced a whole new generation of musicians. His drawings have largely only been seen on his homemade cassettes, album covers, and for sale in music venues during his shows. Both his drawings and music are highly personal and simultaneously express both happy, innocent optimism, and deep sadness and frustration. His methods are clumsy and simple â€“ his results are powerful and deeply moving stories of happiness, love and pain. A documentary about Johnston â€œThe Devil and Daniel Johnstonâ€ will be featured at Sundance Film Festival this year, and a tribute album was recently released with Johnston covers by artists such as Beck, Tom Waits and Flaming Lips.

Jason Holley is an artist and musician living in Los Angeles. He has made his living doing illustration and is considered by many to be one the most interesting and original illustrators living today. His artworks are often made up of images painted on paper, cut out and collaged together. When a client returns an illustration to him he often peels his favorite images back off of it to re-use in personal work or other illustrations. For this reason, most of his illustrations survive only in reproduction. This history also contributes to the aged and dirty quality of his work. Hollyâ€™s work is awkward and raw and incredibly sophisticated and delicate. He also sings and plays multiple instruments and non-instruments with Ukefink. His art was recently featured in Tall Stories at The Wignall Museum in Rancho Cucamonga, CA.

The Clayton Brothers â€“ Rob and Christian Clayton have worked separately making and showing paintings in Los Angeles and have each excelled to the forefront of contemporary illustration and have highly influenced current trends in that field. They have recently changed course, collaborating to create large explosive paintings and installations that are a result of an expanding personal dialog between the two brothers. The dense fields of imagery are formed by a back and forth communication between them. The fact that theyâ€™ve had identical upbringings, experiences, similar interests and personal visions has made it seamless. It is near impossible to distinguish between their contributions. Their work was recently featured in Art Statements at Art Basel Miami Beach.

Mimiyo Tomozawa is widely known throughout Japan for her small paintings and illustrations often depicting cute chubby sweating figures in odd sexual and uncomfortable situations. In America she is most known for her cover artwork for Jim Oâ€™Rourkeâ€™s Eureka and Insignificance albums. While living in Paris she recently released Viens Chez Moi!!!, a picture book featuring her artwork. She currently resides in Tokyo.

Saiman Chowâ€™s work strongly reflects the impact of spending half his childhood in Hong Kong absorbing Chinese and Japanese pop culture and manga, and the other half in Los Angeles surrounded by American pop culture, contemporary art and design. He co-founded United Bread a motion graphics animation company and collective and has been a major driving force at Brand New School one of the premiere motion graphics studios in the U.S.

Yusaku Hanakuma is a Tokyo based artist who has achieved a large amount of success for the manga comics that he writes and illustrates. His drawings are crude and quickly made and his stories are often sick and bizarre. Potty humor, bizarre sex and lighthearted violence reigns in his work. Hanakumaâ€™s characters such as Afro and Hage (translates to Bald Head) have been reproduced on everything from clothing to notebooks and dishes. Hanakuma is also a fighter. He is a member of Ichibanbosi Grappling, a total fight martial arts team trained in submission wrestling and jiu jitsu. One of his recent manga books Tokyo Zombie is currently being made into a live action feature film by the same name.

Rich Jacobs makes a large number of drawings and paintings on found materials, and they are often installed in large expansive groups on the wall. He is also known for his series of curated art shows and zines called Move, which have had a huge impact and have brought together and highlighted connections between artists working across multiple artistic genres. He currently lives in Brooklyn.

Taylor McKimens is an artist living in Brooklyn. Recent shows include Drip and Splat at Annet Gelink Gallery in Amsterdam and Trunk of Humours at Deitch Projects in New York.