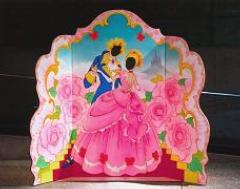 In recent years, those artists who have grown up with comics and animation are literally â€œanimatingâ€ the contemporary art scenes in Japan and Korea. Unlike the 60s when Pop Art appropriated comics as the iconic symbol of popular culture, in the 90s, comics and animation became a part of everyday life in both Japan and Korea, producing new expressions by young artists for whom comics played a crucial part of their experiences of growing up.

The variant approaches in their works include: the making of a new character by taking references from existing comics, utilization of expressive techniques that are specific to comics such as framing and narrative, and application of the techniques of animation. The works by each artist are shown in vitrines like the frames in comics. As the title of the exhibition series, â€œCrossing Visionsâ€ may suggest, the exhibited pieces cross the borders between the gallery space and other spaces in the museum. â€œAniMate。â€ is a coinage based on â€˜animationâ€™ and â€˜mate.â€™

Program related to the exhibition

Korean comics are in the museum!!
You can read Japanese comics published in Korea during the exhibition period.
Place: Sculpture Lounge, Cafe Huang Liuli

Work in Progress
Nishiyama Minako and 44(Sasa) are producing their work in the museum from the end of January.

Image: Nishiyama Minako "Welcome to your Cinderella Kitsch S" 2004
You can be Cinderella in the exhibition!?